What can I do for Amazon, and what is Amazon doing for me 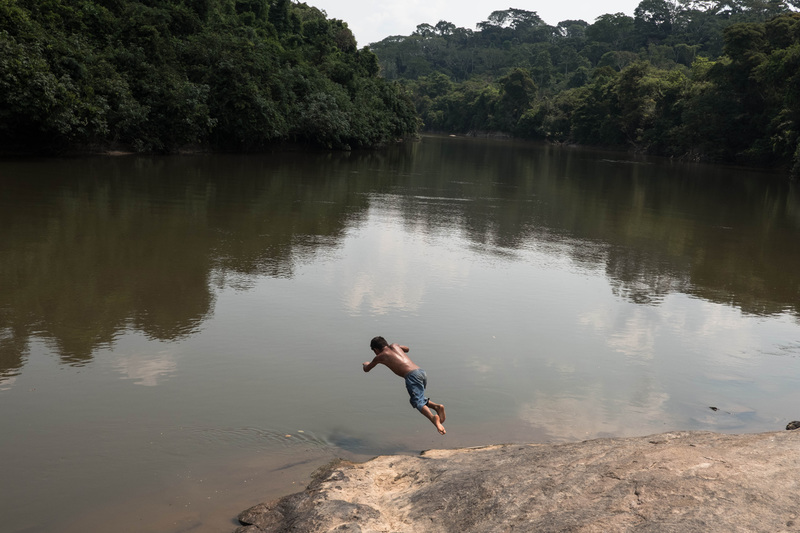 A Karipuna boy diving in the Jacy-Paraná river near the Panorama village.

Voting for preservation in elections is one of the most important actions for Brazilians.

There are many ways to look at the Amazon. It is important to note that the Amazon is much more than billions of trees in a huge area of ​​more than 6 million square kilometers.

It has a life of its own, integrated into the system that regulates the climate of South America and the planet. It feeds with its ecosystem services the Brazilian agribusiness and provides water for a significant part of the Brazilian population.

In addition to these essential functions, the Amazon is the largest carbon reservoir in any ecosystem on the planet, consisting of more than 120 billion tons of carbon in its biomass. It’s such a huge number; it’s hard to fully understand its magnitude. But the entire fossil fuels burning across the planet currently emit around 9.5 billion tons of carbon into the atmosphere.

In other words, we have carbon stored in the Amazon, the equivalent of more than 10 years of all the burning of fossil fuels on the entire planet. This is one of the reasons why each of us must be concerned about what is currently happening to our forest.

The biodiversity of the Amazon rainforest is unusually rich. More plants, insects, and animal species are found per square kilometer in parts of the Amazon than in any other area on the planet. This is no small feat, as biodiversity is the key to biological evolution and life on our planet.

The complex interrelationship between species, and mainly, the strong cooperation and competition between species, is what makes the richness of Life in the Amazon. Fungi on the roots help the plant absorb essential nutrients; animals scatter seeds and pollinate, helping them to reproduce. All cooperate so that the whole is stronger than each individual species.

A third fundamental aspect of the Amazon is its role in the planet’s hydrological cycle. Each tree sucks up huge amounts of water from the soil, processes this water, and takes it to the treetops, which leaves as steam through the stomata as part of the process of photosynthesis. This water vapor is essential in the maintenance of rain, not only in the Amazon but in much of South America and the planet.

Tommaso Protti / Greenpeace
A Karipuna boy diving in the Jacy-Paraná river near the Panorama village.

It is in the Amazon that we have the largest hydrological cycle on the planet. The Amazon River discharges around 220,000 cubic meters of water per second into the Atlantic Ocean. This flow is greater than the joint discharge of the 7 largest rivers in the world after the Amazon. This is no small thing.

These 3 aspects (carbon stock, biodiversity, and hydrological cycle) illustrate the magnitude of the Amazon ecosystem. And what is our government doing in exchange for these essential benefits?

We are making every effort to destroy this ecosystem as quickly as we can. Last year alone, we deforested more than 13,500 km² of forests, in addition to degrading an area even larger than that.

In the last 40 years, we have destroyed a huge area of ​​forest: 19% of the original forest. In the last 4 years, the process of destruction has accelerated, with the invasion and deforestation of public lands, illegal mining of indigenous lands, illegal export of wood, and other similar activities.

In other words, the forest ended up being dominated by criminal activities. It is important to remember that the Brazilian Constitution should be respected throughout the national territory, that is, including the Amazon. However, the actions of militias, which do not respect any law, ended up taking over most activities in the Amazon.

What can we do for Amazon?

Currently, the most important action is to vote for governments that are committed to forest preservation. This, combined with giving a dignified life to the Brazilians who live there.

It is also important to preserve the cultures of indigenous peoples, which are very rich and constitute the original peoples of Brazil. As a nation, we owe important debts to the people who have sustainably inhabited the Amazon for millennia. We must learn from the science developed by these people how to preserve the forest and build a sustainable society.

This is an urgent task for each of us, Brazilians, in respect for nature that gives us so much in return.

This text is part of a series of articles with the theme “What can I do for the Amazon?”. Read also what other PlenaMata columnists say about the topic: