Paving a Road from Brazil’s Acre to Peru’s Ucayali: missing link for development or prelude to social-environmental disaster?

Brazil’s President Jair Bolsonaro tried to convince Peru’s President Pedro Castillo that a highway connection between Cruzeiro do Sul (Acre) and Pucallpa (Ucayali), would generate a “great potential to increase economic integration.” But what is the social and environmental price of it?

Early February 2022, President Bolsonaro met with Peru’s President Pedro Castillo in Porto Velho, the capital of the State of Rondônia, to discuss a potential new highway that would link Cruzeiro do Sul in Acre to the Peruvian city of Pucallpa in Ucayali. At the same moment in time, US Secretary of the Treasury, Janet Yellen, spoke with Brazil’s Economy Minister Paulo Guedes, expressing her support for the decision of the OECD to invite Brazil to formally begin the process of accession but highlighted the importance for Brazil to protect the Amazon basin. At first sight, these meetings might seem unrelated. However, if we take a closer look, they are intrinsically linked to each other.

Only one decade ago, Brazil got its first road connection to the Pacific. The Interoceanic Highway is a 2’603km international route that connects the Brazilian ports of Rio de Janeiro and Santos, via Cuiaba and Porto Velho, to the Peruvian ports of San Juan de Marcona, Matarani and Ilo. The $2bn project was undertaken as part of the Infrastructure Integration of the South American Region initiative. The highway allows the transportation of Brazilian goods to China and vice versa. Instead of shipping its valuable commodities and natural resources across the Panama Canal or south of the African coast, Brazil now can establish trade routes over the Andes and the Pacific to the Orient.

Brazil’s appetite for opening highways in the Amazon did not start with President Bolsonaro. The 1980s and 1990s witnessed the consolidation of conventional development schemes, as promoted and mostly financed by the Washington-based multilateral agencies such as the World Bank and Inter-American Bank of Development. In 1990s, President Fernando Henrique Cardoso launched his Avança Brasil Infrastructure Program. The 1990s also saw the emergence of the Initiative for the  integration of the Regional Infrastructure of South America (IIRSA), for which multi-million loans were made available by the Inter-American Bank of Development (IADB).

Infrastructure integration really took off under President Lula in the 2000s with the launch of his Accelerated Growth Program. This so-called PAC got further expanded and consolidated under President Dilma. Under Lula and Dilma, Brazilian construction conglomerates such as Odebrecht, Andrade Gutierrez, Camargo Correa, OAS and Queiroz Galvão received billions of dollars in contracts and the environmental licensing procedures got increasingly politicized. One Brazilian company, Odebrecht, became world famous for corrupting almost every national government in the Pan-Amazon. 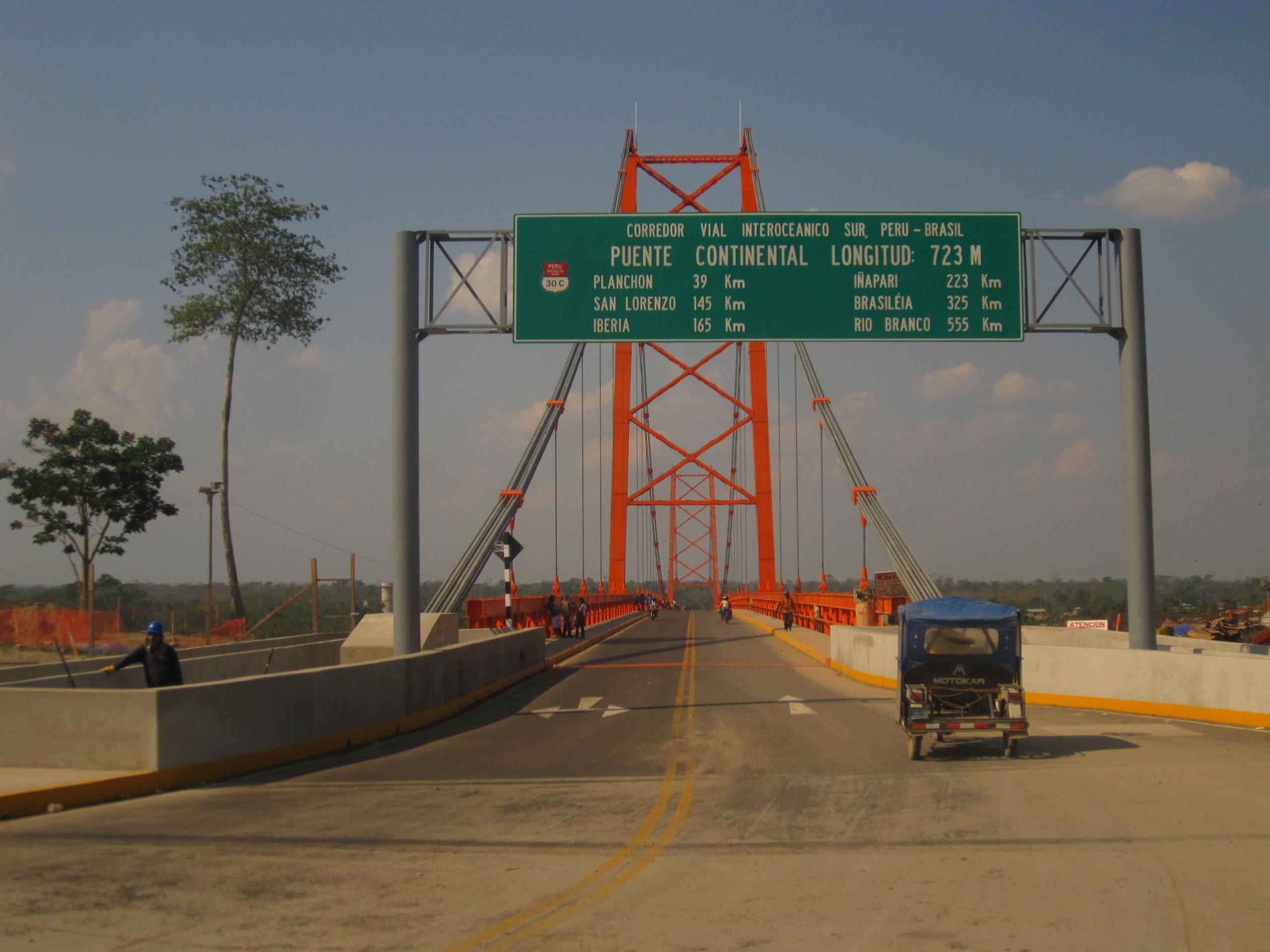 Following the first Interoceanic Highway, connecting Rondônia via Madre de Dios to the Pacific, Brazil is now pushing for a second exit, connecting Acre to Ucayali. But would a second exit be necessary or desirable? If history can be a guide of what to expect then the answer is negative. After one decade of operations, the first Interoceanic Highway has unleashed a gold rush in Peru’s province of Madre de Dios. The opening of a highway between Cusco and Puerto Maldonado has attracted thousands of internal migrants in search of gold. Guacamayo is considered one of the largest illegal gold mining sites in the world. Artisan mining on the Madre de Dios riverbanks, which harbors huge quantities of alluvial gold, continues to cause huge environmental damage.

A disastrous side-effect of the illegal gold bonanza is the destruction of watersheds and fish habitats. The Madre de Dios river basin is already polluted to such an extent that its fish is no longer edible. Restaurants in Puerto Maldonado are only serving fish produced from artificial fish farms. The uncontrolled use of mercury is notorious for entering the food chain, causing neurological disorders. Mercury is the new drug that is killing our Mother Earth. Weak law enforcement on both sides of the border has moreover led to increased drug trafficking, land invasions, deforestation and resource plundering.

The Brazilian government under Bolsonaro, however, seems to turn a blind eye to these devastating environmental impacts. Its Ministry of Transportation has already authorized a tender to contract a company to build a road between Cruzeiro do Sul and Pucallpa. The cross-border road would come with a price tag of an estimated 500 million Brazilian reais or $94 million US dollars. This estimated might be at the low end as the highway would cut through untouched, pristine rainforest for 110 kilometres, cutting through the Serra do Divisor National Park, one of the most preserved areas of the pan-Amazon basin. 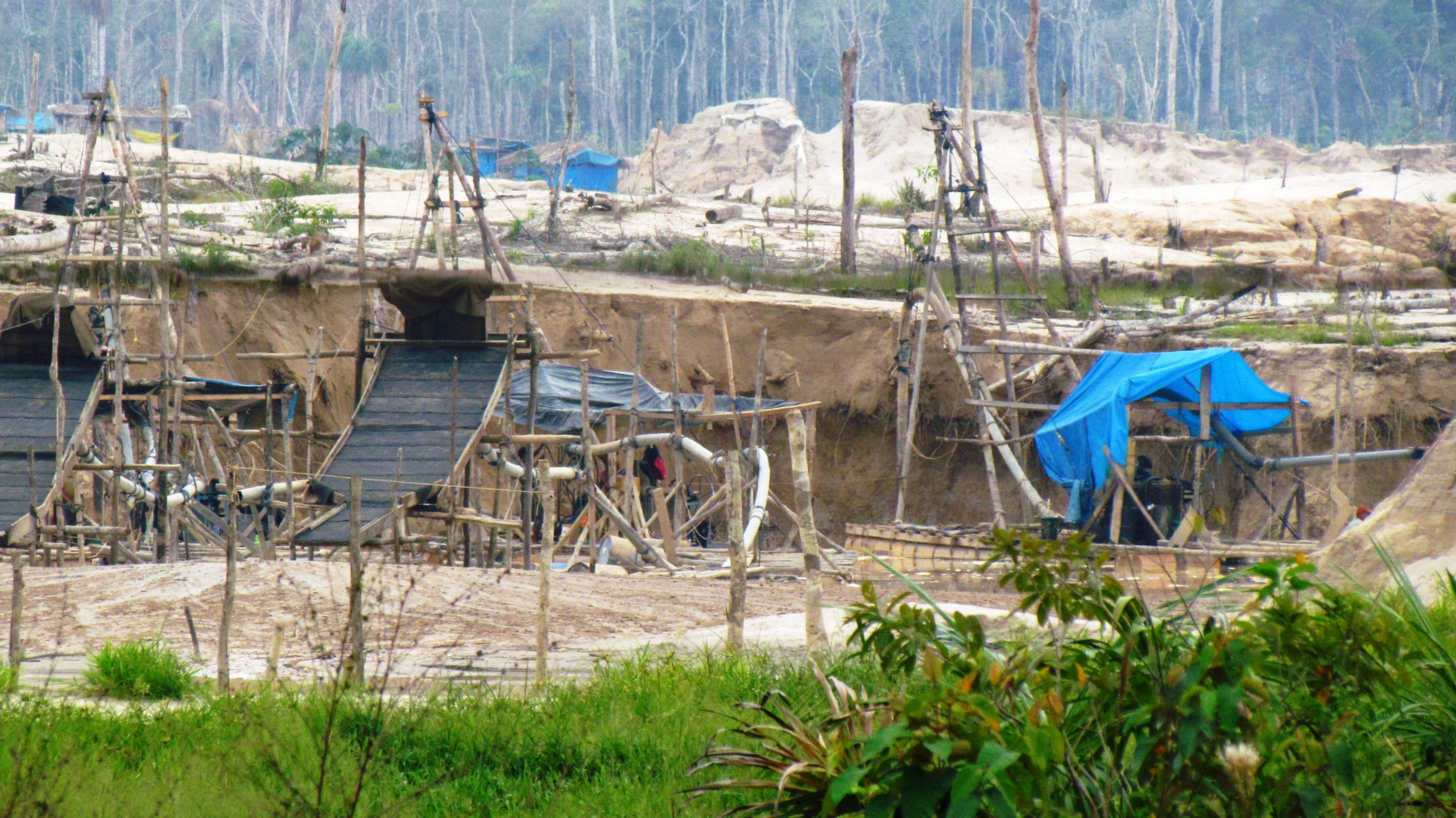 While Brazil’s Federal Government is pushing for a highway, there is less enthusiasm on the other side of the border. Although the Congress of the Peruvian Republic declared a land route between Pucallpa and Cruzeiro do Sul to be of “national interest,” the same opinion is not shared by Peru’s Ministry of the Environment (Minam). According to Peru’s Ministry of the Environment, a road connection ought to be rejected as it would generate environmental impacts on the Sierra del Divisor National Park and the Isconahua Indigenous Reserve, which contains indigenous peoples in a situation of isolation. Peru’s Ombudsman’s Office has argued that a road would put “forests and rights of indigenous peoples at risk.”

Also Peru’s civil society has voiced strong rejection. Aidesep Ucayali Regional Organization (ORAU) has called the project “highly unfeasible.” Aidesep denounced that the right to prior consultation was not considered. In the project area, at least 10 native communities of the Shipibo and Asháninka people on the Peruvian side are identified, and it is estimated that approximately 24 km of the route of the highway would be crossing lands of titled native communities.

In addition, “the possibility that the project be reviewed by the Commission of Andean, Amazonian, Afro-Peruvian, Environment and Ecology Peoples” was rejected. It would increase violence against environmental defenders, since in the Amazon, highways “are the best means of promoting the invasion of indigenous territories, drug trafficking and deforestation.”

Other civil society organizations in Peru are also rejecting the idea. According to Silvana Baldovino, director of the Biodiversity and Indigenous Peoples Program of the Peruvian Society of Environmental Law (SPDA), Peru’s foremost environmental think-tank, a road should already have been rejected with technical arguments for its impact it would have on indigenous peoples and our biodiversity: “The meeting between the presidents of Peru and Brazil generates a series of concerns, not only because of their affinity for ignoring the importance of the rights of indigenous peoples and the need to continue consolidating them, but also because of their constant interest to reduce and relativize the importance of environmental issues and the value of natural heritage for our countries.”

The idea to bring asphalt to a most pristine part of the Amazon also contradicts a recent move of the Peruvian government. After several decades of negotiations, the Peruvian government established a new Indigenous reserve for uncontacted peoples in living in voluntary isolation deep inside the Amazon rainforest. The so-called Yavarí Tapiche Indigenous Reserve covers 1.1 million hectares and is home to Matsés, Isconahua, Remo, Korubo and Matis Indigenous peoples, as well as other groups that have yet to be identified. The creation of the Yavarí Tapiche constitutes a historic milestone in the protection of the rights of Indigenous peoples but is not a guarantee for protection. As these peoples are characterized by their immunological and cultural vulnerability, a road would seriously jeopardize their future. Peru still has an estimated 7,000 Indigenous people living in voluntary isolation and initial contact.

The voices of opposition are not restricted to the Peru’s civil society and indigenous communities or the global environmental lobby. Also global religious leaders have voiced strong opposition. In January 2018, when Pope Francis launched the Amazon Synod in Puerto Maldonado, the capital of Peru’s Department of Madre de Dios, he highlighted how the Amazon is being disputed on various fronts: “We must break with the historical paradigm that sees the Amazon as an inexhaustible larder for other countries without taking into account its inhabitants.” The spiritual director of the world also referred to the issues of territorial rights, land titles, illegal mining, deforestation, oil and gas exploitation and the right to informed consent, including the right to veto infrastructure projects like roads invading indigenous territory.

The Pope’s remarks are consistent with the assessment recently made by the Science Panel for the Amazon. The panel aims to be the expert voice on the Amazon, continuously working together with over 200 scientists, Indigenous leaders and other stakeholders to launch a robust scientific assessment, the first of its kind, on the state of the Amazon, current trends and recommendations for the long-term well-being of their ecosystems and communities.

The 2021 Assessment Report highlighted that “proposed hubs traversing the Amazon Basin are especially contentious given their high costs in terms of human rights, threats to Indigenous peoples and local communities, land expropriation, forest clearance, and forest degradation.” It moreover argues that “how infrastructure decisions are made, in practice, does not necessarily reflect the magnitude of these consequences, but in many cases reflects the political power of coteries, especially in the absence of more participatory forms of planning, even if these are legally mandated, and better full cost accounting.”

The remarks made by Janet Yellen, the US Secretary of the Treasury, when speaking to Brazil’s Economy Minister Paulo Guedes, should be seen in the same perspective. Safeguarding and protecting the Amazon basins should be a unnegotiable pre-condition for Brazil to join the OECD. It would not make any economic sense for Brazil to join the OECD if it continues plundering one its most precious assets: the Amazon.

In sum, pressure from within the region (from Peru’s Ministry of the Environment and Aidesep, to leading think-tanks such as DAR, IBC and SPDA), combined with pressure from outside (from the Science Panel for the Amazon, the US Secretary of the Treasury to Pope Francis) should be sufficient to reject the plans to build road in pristine rainforest areas. Paving a road across the Serra Divisor would only cater to corporate lobbies and benefit short-term profits. Moreover, the lack of a more robust and transparent cross-border cooperation is making the project untenable.

Development in the 21st century can no longer be regarded as a synonymous for opening roads, trade routes and extract natural resources. The opportunity cost would be unacceptably high. As defended by the Science Panel for the Amazon, development and conservation could and should go hand in hand: promoting a sustainable and socially inclusive bio-economy of standing forests and flowing rivers is the best guarantee for progress.