Forest crafts reach all of Brazil via e-commerce 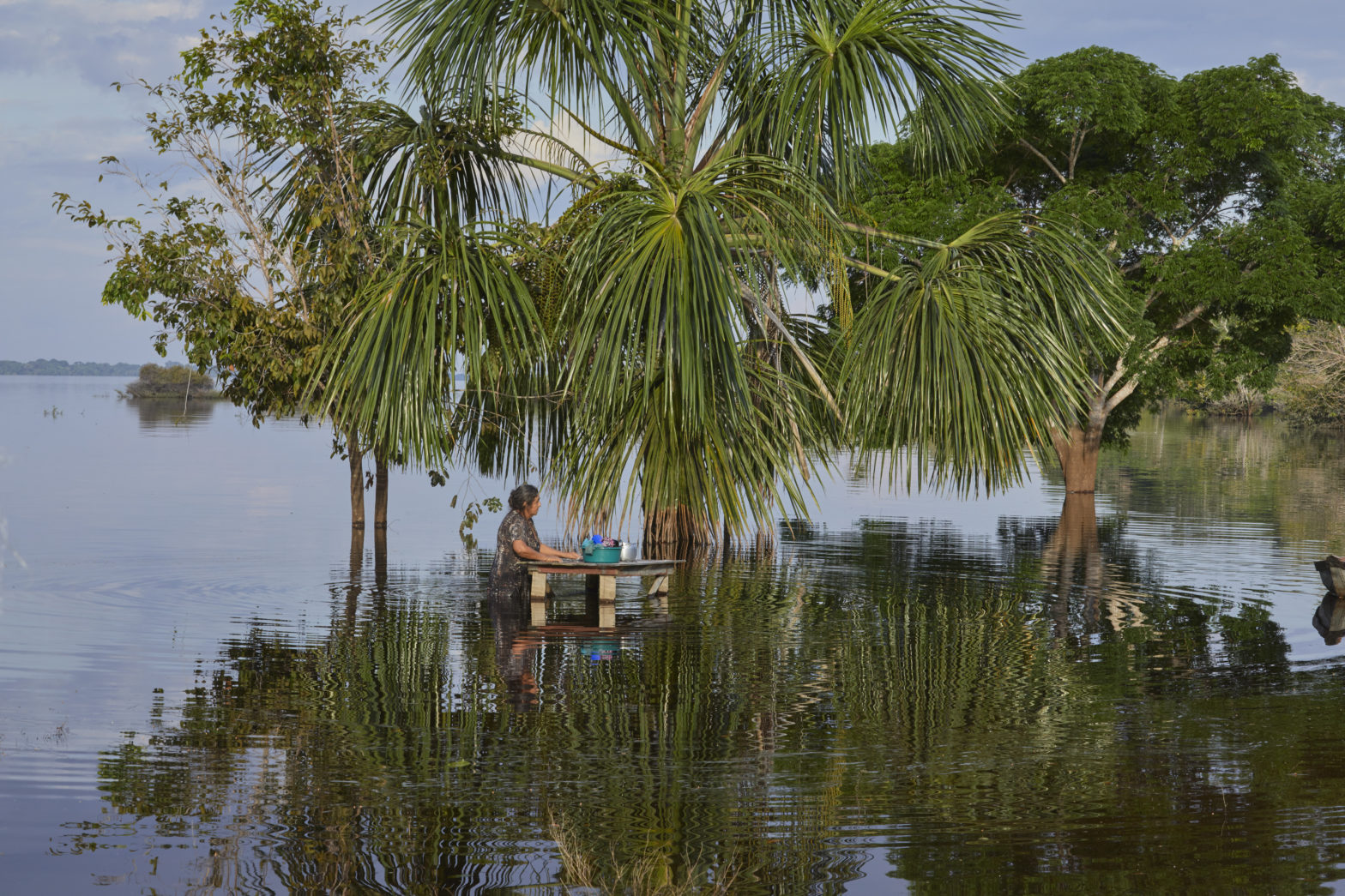 The Jirau Project brings together indigenous and riverside people from Amazonas in the production of sustainable crafts and products with wood, vines, peels, and fruits that are sold throughout the country.

What is it
It maintains a channel for fair and national trade in products derived from the biodiversity of the tropical forest. 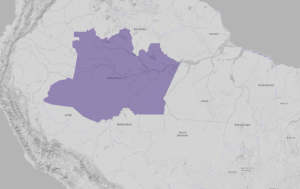 From the state of Amazonas to all of Brazil

Born about two years ago and supported by the rich human and environmental diversity of the Brazilian rainforest, the Jirau da Amazônia project has been reaping positive results in social, economic and ecological terms. The initiative united ribeirinho (traditional riverside dwelling groups) and indigenous communities in the Amazon in the creation and small-scale production of accessories, crafts and decorative pieces that bring together beauty and design. Since its foundation, it mixes improvements in the communities’ quality of life with nature conservation. Products carrying the essence of the Amazon are marketed throughout the country with plans to expand abroad in the coming years.

The partnership solved a logistical bottleneck in the Amazon region by joining a large e-commerce platform, the Americanas.com online store. To get an idea of the enormous challenge that this represents, it takes four days by boat to reach São Gabriel da Cachoeira from Manaus, the capital of the state of Amazonas. Because of this, the project maintains a distribution center in Manaus with inventories planned in advance.

To understand how this happens in practice, PlenaMata spoke  with Wildney Mourão, manager of Entrepreneurship and Sustainable Business at the Sustainable Amazon Foundation (FAS), a non-profit organization that supports the Jirau da Amazônia project, the name of which refers to the traditional wooden support used by the ribeirinhos to fish and store food or household items.

PlenaMata – What are the main commercial results since the launch of the initiative in mid-2019?

Wildney Mourão – Almost a thousand products have already been marketed to all Brazilian states except for Amapá. Seven out of ten customers are from the Southeast region – especially in São Paulo and Rio de Janeiro – followed by the South, Center-west, Northeast, and North. Purchases so far have ranged from R$200 to R$250 per buyer on average. For the time being, items are sold only in Brazil, at street markets and on Americanas.com, a company that is a partner of other initiatives, such as the implementation of solar energy for ribeirinhos. But there are plans to expand sales to European countries, for example, where there is good acceptance for handmade forest products.

What are the ideas behind Jirau da Amazônia?

Both the Sustainable Amazon Foundation and institutional partners and artisan communities felt that it was possible to give an entrepreneurial scale to the trade of products that value the conserved forest, that occurred mainly in street markets through the region and country. Together with allies such as the Zagaia Amazônia Association, the Environment Secretariat of Amazonas and the Amazon Fund (BNDES), unfortunately deactivated by the current government, we expanded and qualified the relationship with artisans. We trained communities to improve the quality, regularity and durability of the pieces, as well as to maintain standards, and how to structure logistics and e-commerce.

All people linked to the project have their artisan’s license, a kind of business registration that allows them to issue invoices and to access other benefits. In general, profit was never the main focus of the initiative. Rather, it was to give visibility and flow to products made in the heart of the forest by their populations. 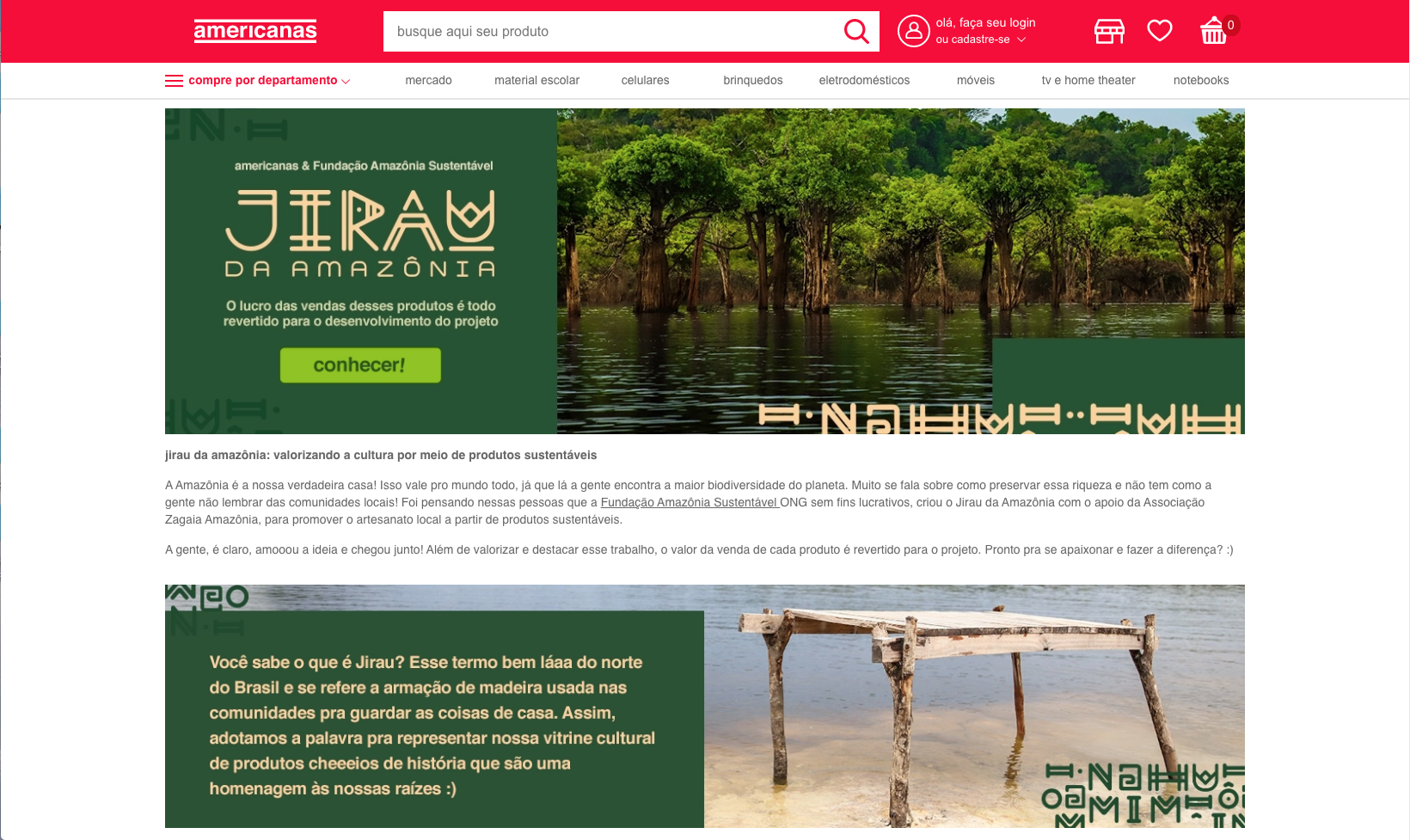 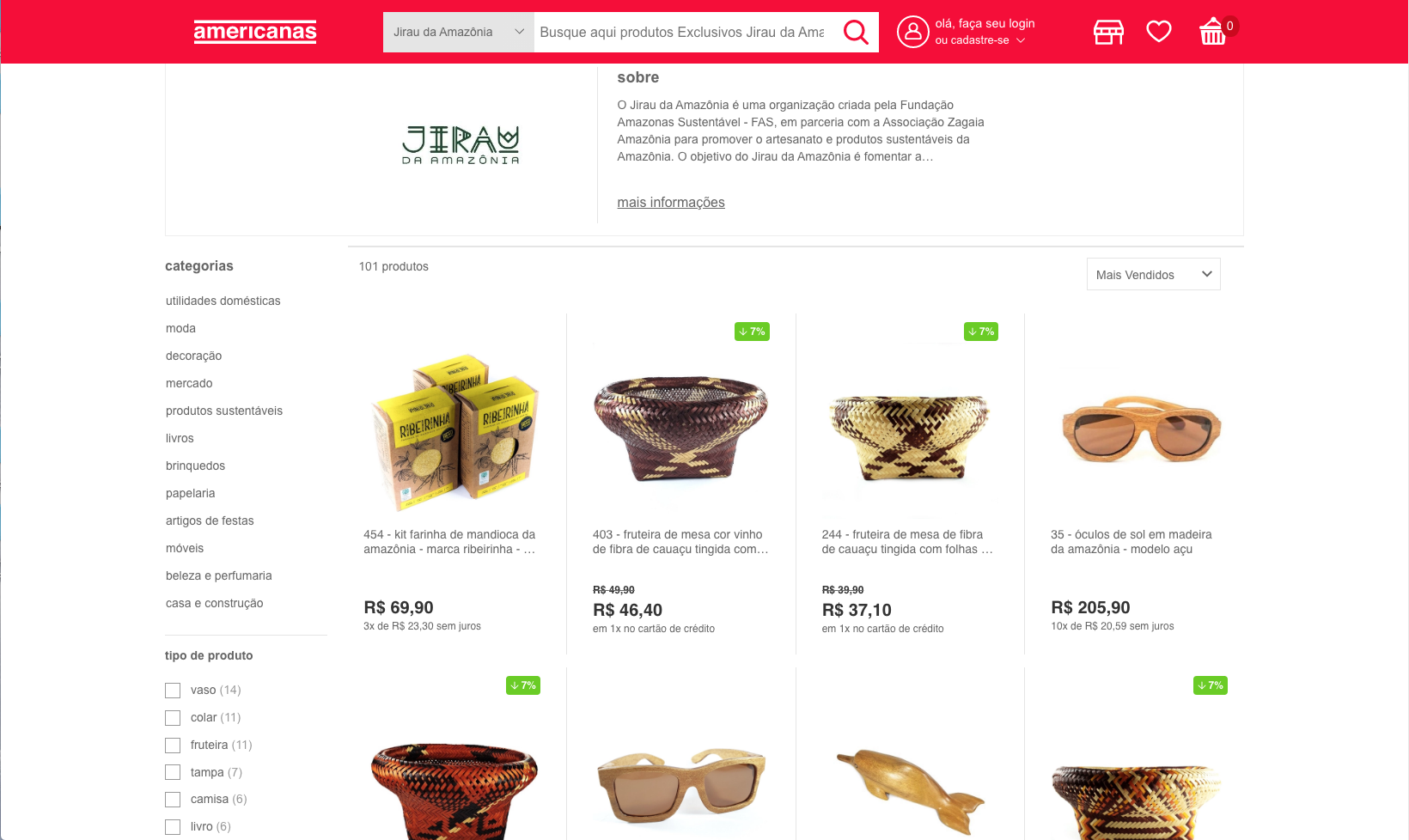 Selection of handmade forest products delivered all over Brazil 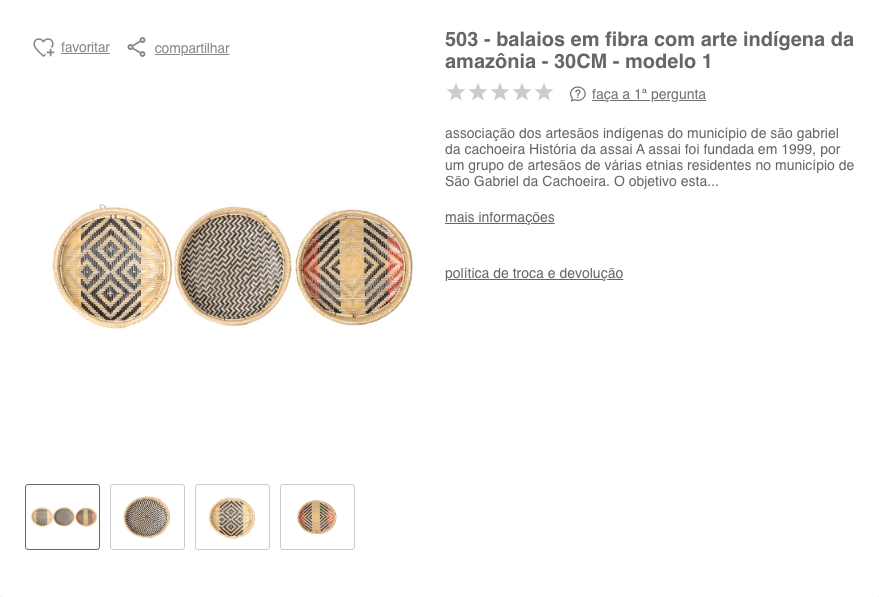 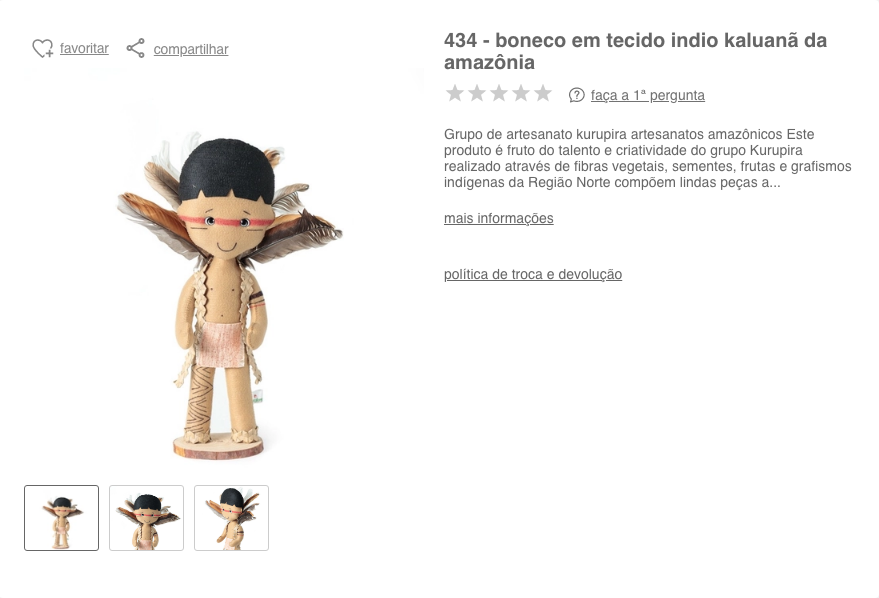 What was the reaction of the communities like when they saw their pieces sold on the internet to people from all over the country?

They did not imagine that their crafts could be sold electronically and that they had such good acceptance. But when they saw the pieces being bought by people from all over the country, they really understood the importance of products that have quality, innovation, design, and durability, products with history and values typical of the Amazon. After two years, everyone is more confident in their abilities and in the business model. All sales profit is reinvested in the project. E-commerce has also been important during the Covid-19 pandemic, as it has allowed the production and sale of artisanal products to continue.

How can they maintain contact, ensure the production and transportation of items from communities that are up to 900 kilometers by boat from the capital Manaus, in the region of São Gabriel da Cachoeira?

Jirau da Amazônia brings together almost 400 artisans from 28 indigenous and ribeirinho communities, including in state conservation units, such as the Puranga Conquista , Rio Negro, Amanã, and Mamirauá Sustainable Development Reserves in addition to the Rio Negro Environmental Protection Area (APA). Due to the reality of logistics in the Amazon – it takes four days to reach Manaus from São Gabriel da Cachoeira by boat – the distribution center’s inventory is always planned about two weeks in advance, setting aside one week for the production and another for transportation. Lack of power and communication have been dealt with through solar panels and other technologies. Any entrepreneur in the Amazon needs to face challenges like these.

Are there criteria for artisans to participate in Jirau?

Yes. The project is inclusive. Everyone can ask to participate, but access depends on the initial quality of the products, their finish, beauty, durability, and other parameters valued by the market. These requirements must be met so that a clientele can be captured and maintained. One of the winners of the Casa Vogue Design 2021 Award, one of the most prestigious in the country, the Tumbira vase collection was launched by Manoel Garrido, a craftsman from a community in the Rio Negro Reserve, and supported by designer Marcelo Rosenbaum and architect Fernanda Marques.

How do they ensure that commercial demands do not generate excessive exploitation of the Amazon?

In the Amazon, there is a sustainable extractive production and a large-scale, industrial one. In Jirau, fibers, wood, seeds, vines, and other materials are used in quantities that allow the forest to regenerate. Communities are aware that if their use does not respect the forest’s capacity, they may lose their market and extra income. If they do not leave some açaí in the palm tree, the birds will have nothing to eat and will not disperse seeds through the forest, giving birth to new trees. Maintaining people’s quality of life and the health of the Amazon is more important than selling large quantities. It is necessary to respect the populations and their territory.

How can Jirau be transposed to a development model for the entire Amazon?

The project is based on building a new entrepreneurial culture for the region. The Amazon cannot continue as a mere supplier of inputs on a large scale, which will generate jobs and income in other regions and not improve the lives of people who live in the forests.

Their populations have the capacity to add quality and value to products in a production model based on bioeconomy, respecting the forest. As this practice spreads, people increasingly see themselves as sustainable entrepreneurs, with better socioeconomic and conservation outcomes.

They realize that it is possible to produce crafts and other items without compromising the lives and future of people and the forest. It is also an effective model to combat poverty through income distribution in the context of an extremely rich territory in terms of natural resources.

Photo at the top of the page shows an artisan on a jirau, a traditional wooden support used by riverbank dwellers for fishing, storing food, or household items. Credit: Nicoly Nogueira.