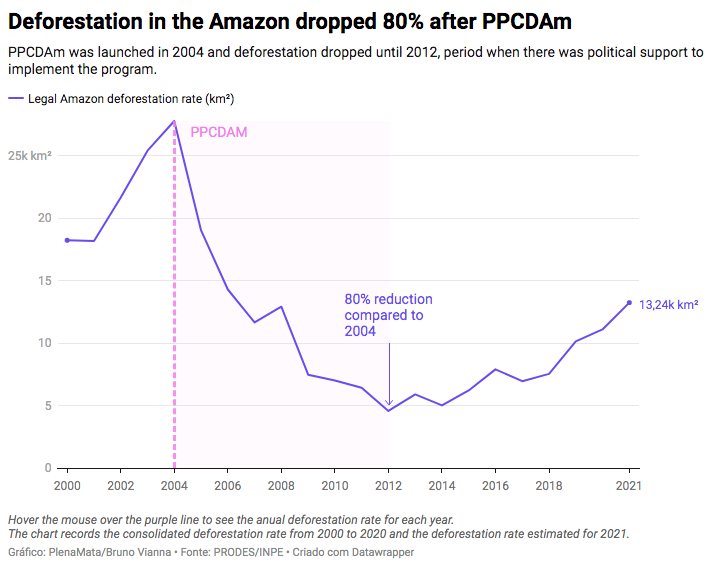 Deforestation in the Amazon is not an unsolvable challenge and it certainly isn’t an unfamiliar problem. Brazil knows what it must do to undo the current tragic scenario.

The worst result in 15 years. That’s what the official estimate for the 2021 Amazon deforestation rate — a staggering 13,235 km2 — means. The figure might not be surprising in light of the alarming dismantling of forest conservation efforts currently underway in Brazil, but it is appalling nonetheless. It is also absolutely unjustifiable and unacceptable.

Brazil knows what to do to fight deforestation in the Amazon. Over the past two decades, the country innovated along several policy dimensions and gained broad experience in the use of policy instruments to protect its native vegetation. Academia has already evaluated several of these instruments, producing a robust body of empirical evidence on their effectiveness and impact.

In the early 2000s, with average annual deforestation rates in the Amazon exceeding 22,000 km2, Brazil was clearing more tropical forest than any other country in both absolute and relative terms. Under mounting internal and external pressure to control its high rates of forest loss, Brazil developed the Action Plan to Prevent and Control Deforestation in the Legal Amazon (PPCDAm in the original Portuguese acronym).

Created in 2004 by the federal Brazilian government, the action plan proposed a set of strategic measures to combat deforestation and promote sustainable regional development. PPCDAm brought a novel approach to tackling  Amazon forest loss. It broke new ground not only in content, by introducing innovative policy instruments, but also in form, by establishing the fight against deforestation as an interministerial effort rather than a responsibility solely of the Ministry of the Environment.

The first decade of PPCDAm saw the deforestation rate in the Amazon plummet from 27,800 km2 in 2004 to 4,600 km2 in 2012, an 80% reduction (see bellow). Academic evaluations show that policies enacted under the scope of the action plan significantly contributed to this reduction. For a summary of the available evidence regarding the impacts of the plan’s main policies, see this Climate Policy Initiative/PUC-Rio platform.

Empirical results highlight the importance of strategic and coordinated policy efforts, a key contribution of PPCDAm. Some efforts were particularly relevant. The pioneering use of satellite monitoring technology to quickly detect forest loss and target environmental law enforcement operations increased the probability that illegal deforestation would be duly punished and thereby helped inhibit illegal practices.

Critical areas were subjected to targeted action and the concession of subsidized rural credit became conditioned upon compliance with environmental and land tenure regulations. Territorial protection also started being used as a barrier to the advance of deforestation in high-risk areas.

The effectiveness of policy efforts is heavily influenced, however, by the institutional context in which they are implemented. Although the set of policies adopted under PPCDAm initially helped slow down deforestation, the rate of Amazon forest loss started to rise again in the mid 2010s. This happened amid a scenario of national economic crisis, deteriorating commitment to Brazilian environmental legislation, and changes to the plan’s governance. Since the end of its fourth phase, which covered the 2016 to 2020 period, the PPCDAm was not renewed.

Brazil’s experience shows that the country is fully capable of developing and implementing a public policy agenda for Amazon protection that is innovative, strategic, and effective. PPCDAm wasn’t perfect, but it succeeded along several dimensions, and its shortcoming point towards paths for strengthening forest protection.

Amazon deforestation is not a challenge for which there is no solution, and it certainly isn’t an unfamiliar problem. Brazil must and can act immediately to fight deforestation. Nothing justifies the contrary.