The mines are made of paper, but the destruction is real 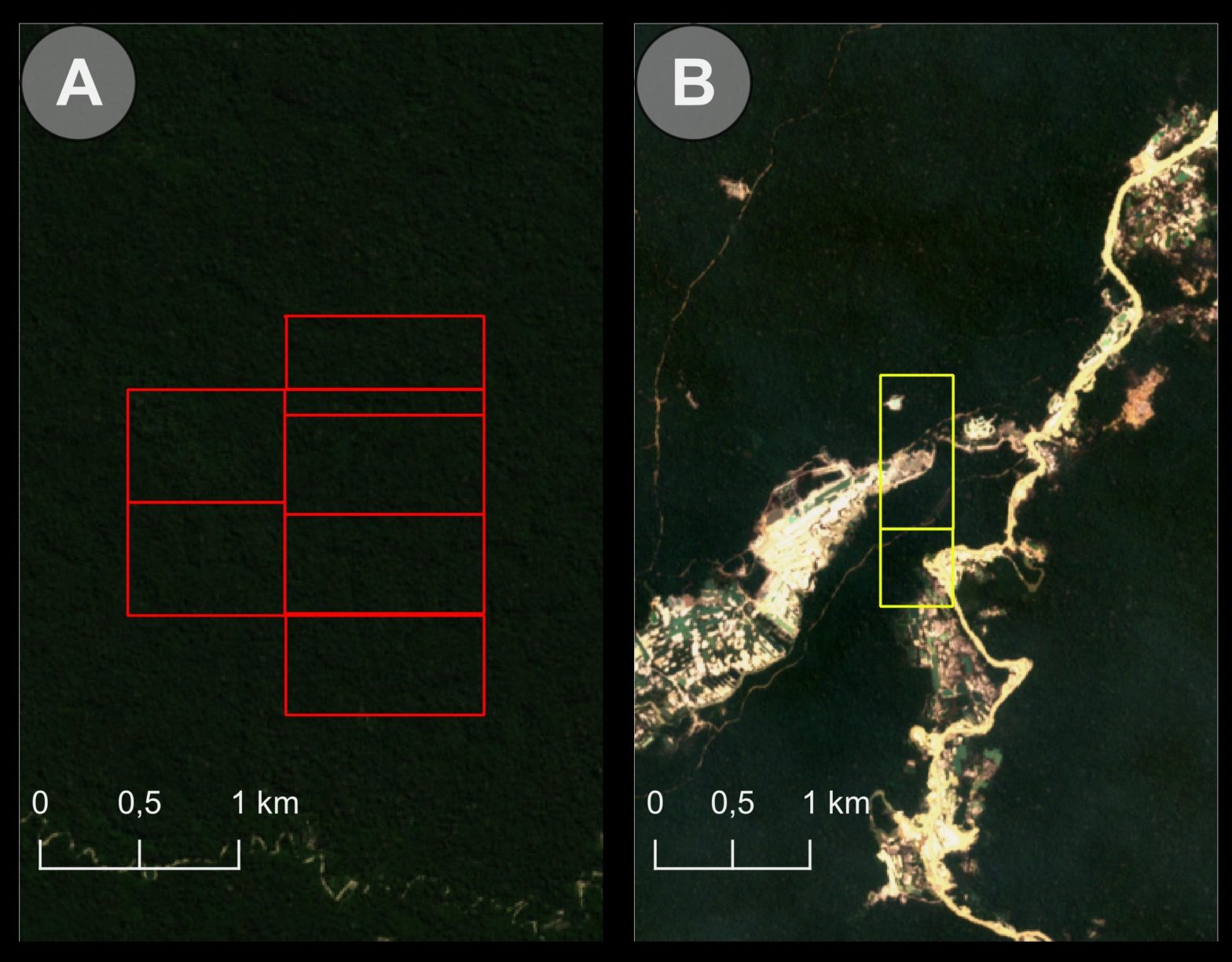 A study on a new gold rush targeting the Amazon shows that much of the ore is extracted illegally, leaving a trail of deforestation and mercury contamination.

Since the discovery of gold in Minas Gerais in the early 18th century, Brazil has become one of the largest exporters of this ore in the world. This exploitation had, however, an enormous human cost, with hundreds of thousands of African slaves forced to work in underground mines in inhumane conditions. Much of this gold is gone, and nowadays it can be found in the jewelry of noble families in Europe and banking institutions around the world, leaving behind a trail of poverty and underdevelopment.

Today we are experiencing a new gold rush targeting the Amazon. Mining is one of the activities that exert the most pressure on the Amazon forest. Between 2019 and 2020, 20.6 thousand hectares were degraded and transformed into areas for mining in the legal Amazon, according to data from INPE. The highest rate occurred in 2019, with 10.5 thousand hectares deforested. The high international price of gold, the dismantling of environmental agencies, and President Jair Bolsonaro’s support for the regularization of illegal mining activities have encouraged the expansion of the activity into indigenous lands and conservation units.

The situation is even more serious today. Between January and September, the production from garimpos (i.e. wildcat mining) exceeded the figure for 2019, reaching 10.8 thousand ha. We also witnessed the intensification of social conflicts between miners and indigenous communities. Production at regular mines and in garimpos reached historic records, as did gold exports.

According to the Brazilian Constitution, all mineral resources, such as gold,  belong to the Federal Government, regardless of who owns the area where the ore is found. Therefore, to extract the ore it is necessary to obtain authorizations from the National Mining Agency (ANM) and the competent environmental agencies, and to pay a financial compensation for the exploitation of mineral resources (CFEM) relative to 1.5% of net sales.

Several investigations by the police and Public Ministry point to cases where gold coming from areas where mining is forbidden, such as indigenous lands and conservation areas, is “laundered” by false declarations that disguise the real origin of the mineral. After this process, it enters the market and can circulate among financial institutions, jewelry stores and even be exported under the condition of legal gold. Until then it was not clear how big the problem was.

Based on the methodology developed for agricultural traceability, our group at UFMG collaborated with the Federal Prosecutions Office (MPF) to estimate the level of illegality of gold production in Brazil. To this end, the MPF designed a protocol that points to evidence of irregularities based on current legislation. UFMG, in turn, combined data from the ANM on mining processes and CFEM payments with satellite images and information on protected areas in order to apply the MPF’s protocol.

From this analysis it emerged that 28% of the gold production has no clear origin due to lack of spatial information (despite the majority coming from large companies in Minas Gerais) and 40% has an apparently legal origin. In the remaining 32%, it was possible to identify evidence of irregularity, including cases of “ghost mining”, when the declared origin of the gold does not show evidence of mining activity on satellite images (ps. these are the latest estimates based on new satellite images, and therefore bring slightly different values from those published in the full report already released).

The situation is even more alarming in gold production in the Amazon. Of the 80 tons mined between 2019 and 2020 in the region, 44 t have evidence of irregularities (illegal and potentially illegal). And all indications are that this is only the tip of the iceberg. Our study only identifies “poorly laudered” gold, that is, when there has been an attempt to conceal the origin and a mining title has been chosen that presents inconsistencies and irregularities visible by satellite images.

The study was not able to estimate the amount of gold that is trafficked without an attempt at legalization. However, the DETER data provides evidence about the size of the impact of illegal mining, whose true provenance is being concealed.

From early 2019 to late 2020, DETER identified 21,000 hectares of deforestation for mining, with 84% of this area located in the state of Pará, 7% in Mato Grosso, and 6% in Amazonas. Only 4% of this total occurred in the area of the mining processes cited in the CFEM as the origin of the gold, suggesting the prevalence of illegal mining. Also, of the total deforested in the period for mining, 5,000 ha occurred on approved indigenous lands, especially the Kayapó TI, with 2,137 ha, and the Munduruku TI, with 1,925 ha, both located in Pará.

As a result of the absence of stricter controls by the ANM, environmental agencies and the Internal Revenue Service, this illegal gold generates social conflicts, the destruction of environmental resources and pollution from mercury used in the mines. Through the calculator of impacts of illegal mining, a tool developed by the MPF and the non-governmental organization Conservation Strategy (CSF-Brazil), it is possible to estimate the value of the damage generated by each gram of illegal gold.

The 7.7 tons extracted illegally result in a loss of between R$ 22.6 and 47.3 billion (U$ 4,2 and U$ 8,8 billion), adopting, respectively, a conservative methodology (average values) and the precautionary principle (maximum values). Cardiovascular diseases, such as hypertension and heart attack, resulting from mercury contamination are responsible, on average, for 87% of this value, and the impact of deforestation for 9.4%, as shown in the reports generated by the tool.  Meanwhile, for all the gold exploration in the country, the government collected only 640 million reais through CFEM and IOF-Ouro, less than 0.03% of the damage calculated by the conservative methodology.

In addition to socio-environmental damage, illegal gold is often used to launder money from arms and drug trafficking, land grabbing, and corruption. This thesis is also corroborated by the concentration of illegal gold transactions in a few producers and buyers. This indicates that, while the illegal gold mining activity concentrates profit in the hands of a few actors, environmental damage affects the entire society.

Once again the same history repeats the past: the country’s wealth is exported for the benefit of a few, leaving behind a trail of human and environmental destruction.