The European Union wants deforestation-free consumption. What about you? 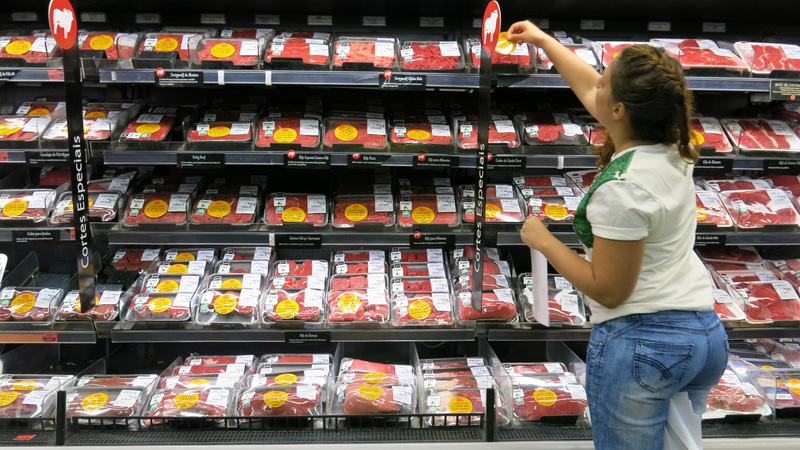 Greenpeace launches a new campaign in Brazil titled “Carne ao molho madeira” (Meat alla Timber), to highlight how supermarkets are contributing to the destruction of the Amazon rainforest. Activists take action in Pão de Açúcar stores in São Paulo, and apply labels on meat products reading “Do you know where this meat comes from?” The aim is to make customers aware about the relation between deforestation, cattle raising and the meat that lands on their table.

Five years ago, I stopped consuming beef after concluding that it is impossible to find deforestation-free meat in the Amazon. Before that, I went through a transition phase. I only purchased beef from slaughterhouses that had committed to vetoing the purchase of cattle from farms with illegal deforestation. Meat companies and the Federal Prosecutors Office formalized such a commitment in 2009 in the so-called Beef Agreements.

However, in 2017 an Imazon study revealed several weaknesses in the execution of such agreements. Imazon demonstrated the high risk that meat packing plants still acquire cattle from illegally deforested areas. Therefore, as a consumer, I chose to stop promoting this illegality.

Individual decisions to direct purchases toward sustainably sourced products can have a negligible effect. But when countries or blocs of countries choose to veto imports of unsustainable products, the result is potentially more transformative. This is what I expect from the European Union’s recent decision to bar imports of products linked to deforestation around the planet.

Approved on December 6 of this year, the regulation for deforestation-free products will come into force in 18 months for large companies and 24 months for medium and small companies. These periods will be used to publish additional details of the new rule and for companies to adapt to the new requirements.

The products initially targeted by the EU rule are: cattle, cocoa, coffee, palm oil, soybeans, wood, rubber, charcoal, printed paper, and other products made from or derived from these raw materials. For example, chocolate, leather, and furniture.

To be imported, these products cannot be linked to deforested areas after December 31, 2020, whether considered legal or illegal deforestation by the country of origin. In addition, production must comply with the rules of the producing countries, including human rights provisions.

The due diligence that the EU will require from companies will depend on the country of the product’s origin. The higher the risk of deforestation, the higher the level of scrutiny. The EU will divide producing countries into three categories based on their deforestation risk: low, medium, and high. For example, a company from a country considered to be at high risk of deforestation will have to undergo more detailed due diligence compared to a company from a low-risk country.

The criteria for this risk classification is yet to be determined by the EU in a specific rule, considering factors such as i) deforestation rates, ii) production of commodities, iii) legislation in producing countries and iv) whether the country has included in its climate commitments to the Paris Agreement the reduction of greenhouse gas emissions from the land use sector. In this context, Brazil will likely be considered a high-risk country. Therefore, Brazilian companies that export products listed in the European regulation must adapt to the new rules.

But like any new regulation, some aspects will need to be improved. Going back to my rule of not buying beef, it didn’t take long to realize several other products that I still consumed that were linked to deforestation. For example, sausages made with mixed meat, leather goods, dairy products, and several others. Over time, I have expanded the list as the market has also started to make more vegan and certified products available, for example. It is an ongoing process of consumer awareness.

The European regulation will also need to be improved and already provides for a review period after the first year. One aspect already criticized is excluding non-forest vegetation from the restriction, such as the Brazilian Cerrado. The Cerrado has been increasingly devastated and does not have the same level of legal protection as the Amazon biome.

Deforestation in the Cerrado grew 25% last year, reaching 10,688 km2 destroyed between August 2021 and July 2022. The states that concentrate more than 70% of this annual loss are known by the acronym Matopiba (Maranhão, Tocantins, Piauí, and Bahia), considered a region of agribusiness expansion.

The Cerrado has the most significant agricultural area in the country (42%), according to data from the MapBiomas network. Therefore, it is also the most impacted biome by the production of exported commodities, especially soy.

The EU has already signaled the inclusion of other wooded lands within the new law’s scope after the first year. Thus, it will also cover products from the Cerrado, which will not be linked to deforestation after 2020.

We are facing a point of no return when the world consumer markets will start demanding sustainability in practice, not just speeches. Other countries, such as the USA, are also studying the adoption of rules similar to those of the EU. And Brazil has all the conditions to be the leader in the exportation of deforestation-free products, considering its already deforested areas are sufficient to expand agricultural and cattle raising production.

Brazil needs to reduce deforestation to avoid harm to its exporting companies. Curbing the forest loss will put the country in a less demanding classification in the European due diligence process. Therefore, wasting time criticizing the EU rules or claiming a violation of the producing countries’ sovereignty is useless. The Brazilian government needs to quickly resume its capacity to combat deforestation and take measures to adopt sustainable production as the standard, and not the exception as is the case today.

Lawyer and PhD in Science of Law from Stanford University. Born and resident in Belém (Pará State), she is an associate researcher at Imazon, working for 18 years to improve environmental and land laws and policies for the conservation of the Amazon Rainforest.