The standing forest is not intact 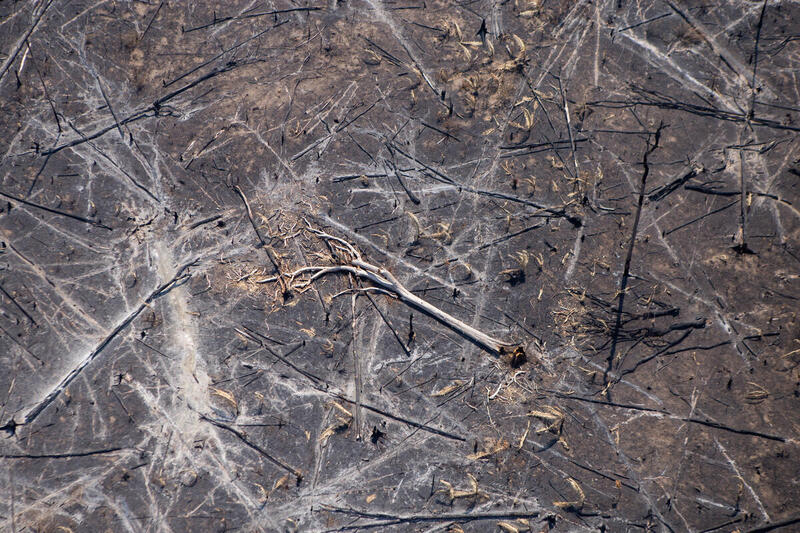 Overflight images in Porto Velho, in the Amacro region (Amazonas, Acre and Rondônia states), in an area of around 8,000 hectares of deforestation - the largest in 2022 - that has been burning for days.

Forest protection must go beyond combating deforestation. It is critical to understand, report, and fight forest degradation in the Amazon.

Nearly 20% of the Brazilian Amazon Forest has already been deforested. So the remaining 80% — over 3.3 million square kilometers of tropical forest — are intact, right? Wrong.

When talking about Amazon deforestation, we refer to “clear-cut deforestation”, meaning the complete destruction of native vegetation that once existed. Brazil knows this phenomenon well. It has accumulated several decades of monitoring, analysis, and public policy action regarding deforestation.

Yet, the forest faces threats beyond deforestation. Some forest areas that have not yet been deforested are already degraded. They have lost part of their vegetation, but not enough to qualify as being deforested.

It is a mistake to assume that the partial loss of vegetation causes insignificant damage. Degraded forests are less resilient than intact ones, so they are more prone to suffer additional damage that further aggravate degradation, making them even more vulnerable. Degraded forests gradually lose their capacity to provide critical ecosystem services, such as biodiversity conservation and carbon sequestration and storage.

This is an urgent topic for Brazil. On average, degradation annually affects an area at least as large as — and often larger than — deforestation in the Brazilian Amazon. This has relevant implications for carbon loss and, consequently, greenhouse gas emissions. Between 2010 and 2019, forest degradation was estimated to account for three quarters and deforestation for only one quarter of gross biomass loss in the region.

Forest degradation in the Brazilian Amazon is not just an initial stage of a process that culminates in clear-cut deforestation, but a phenomenon with drivers and dynamics of its own. There are three main activities associated with degradation in the region: selective logging, which directly interferes in forest ecosystems by removing native species from their environment; fire, which does not occur naturally in tropical forests; and deforestation itself, which affects climate at local and regional scales.

Brazil must put in place specific efforts to understand and combat forest degradation in the Amazon. Monitoring and measuring such a diverse and nuanced phenomenon are admittedly challenging, but we’ve made important progress in this direction. The official system for monitoring forest loss in the Brazilian Amazon identifies different types of forest degradation, and there are official data on active fires across the full extent of the Brazilian Amazon.

Yet, Brazil continues to overlook forest degradation. The country’s environmental performance metrics essentially ignore degraded forests and, instead, focus solely on deforestation. This also applies to emissions from forest degradation, which are not included in Brazil’s inventories of greenhouse gas emissions. Agreements, commitments, and targets that disregard forest degradation will not suffice to mitigate the risk of critical climate change scenarios.

In the past, Brazil earned enormous international respect by taking a pioneering approach to not only measuring and monitoring tropical deforestation, but also combating it. Now, it could once again play a leading role at the global stage by understanding, reporting, and actively addressing forest degradation in the Amazon.

Ph.D. in Economics from PUC-Rio and Head of Conservation Policy Evaluation at Climate Policy Initiative/PUC-Rio. Her research generates rigorous empirical evidence on the effectiveness and impacts of key policies for forest protection, with a focus on the Brazilian Amazon.