Oil and gas pose a silent threat to the Brazilian Amazon 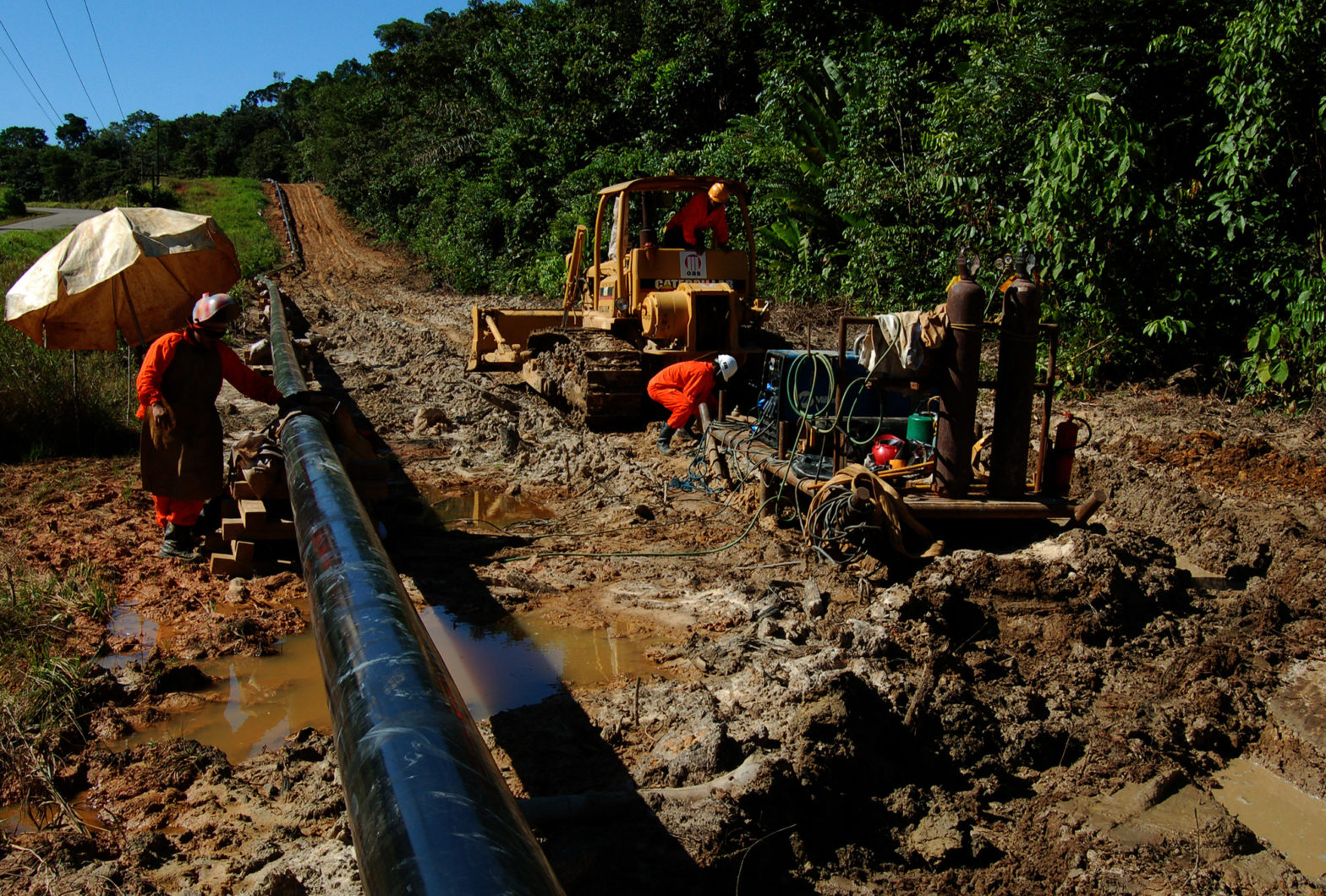 In a struggle still hidden from the public opinion, indigenous peoples and traditional communities try to prevent expanding fossil fuel extraction projects in the forest from repeating disasters like those experienced in Ecuador and Peru

In April 2020, while the whole world was frightened by the advance of the covid-19 pandemic, 35,000 indigenous people from the Kichwa people of the Ecuadorian Amazon were forced to deal with another disaster on their lands.

“The young people went fishing early in the morning, and when they returned, their bodies were covered in oil,” Olger Gallo, president of the Kichwa community in Panduyaku,  told El País. This oil had spread rapidly through the Napo and Coca rivers after the rupture of three pipes that make up the Transequatorian Pipeline System (Sote) and the Shushufindi-Quito Polyduct, which transport crude oil from the Amazon to the country’s capital.

At a time when the pandemic demanded everyone isolate and depressed the economy, indigenous communities, already socially vulnerable, lost their source of food and water for months. Children who bathed in the affected rivers before learning of the leak had stomach and skin diseases, and an entire people had to endure the contamination of their sacred sites and the unwanted disruption of their traditions.

Since then, the Kichwa have tried unsuccessfully to get reparation for the damage. The state-owned oil company PetroEcuador and the private company that manages the pipeline, OCP Ecuador, deny responsibility, while the country’s government strives to move forward as if nothing had happened.

This unfortunate episode is only one among many cases of oil spills recorded in recent years in the Amazonian regions of Ecuador and neighboring countries such as Peru and Colombia. Regarding Brazil, this set of tragedies can be seen as a preview for the film we will watch in horror if we do not take steps to maintain our share of the Amazon free of oil and gas extraction as soon as possible.

At the forefront of this task – saving the world’s largest rainforest from the potential damage of fossil fuels – are indigenous communities such as the Huni Kuin in Acre and the Mura in Amazonas. These are some of the peoples already affected or potentially affected by companies in the sector, interested in carrying out colonialist projects in the vicinity of traditional territories.

The Huni Kuin suffer from the threat that areas close to their territories will be offered for exploitation projects, such as in the case of the Javari Valley. In 2013, when the ANP tried to auction off oil and gas blocks in this region, the communities surrounding the areas campaigned with the support of NGOs to show that they would not accept this aggression. They managed to curtail the event, but fear that they will try again soon. The Mura, from Amazonas, are forced to live with impacts such as clearings in the middle of the forest near their lands because of ongoing extractive operations.

These peoples` leaders have been trying to warn society that we need to prevent this socio-environmental disaster from wreaking havoc in the biome that makes Brazilians so proud, but the issue is still off the radar of most citizens and the press.

In the Bolsonaro government, aggressions against the survival of indigenous peoples and the Amazon biome, which date from decades ago and were never properly dealt with, exacerbated to such an extent that it is difficult to pay attention to any new threat. Still, the history of oil and gas in Pan-Amazonia is so disastrous that it requires attention and action from those who care about the environment.

In the case of people living in the state of Amazonas, the third largest gas producer in Brazil, the risk is already quite concrete. Petrobras operates the Urucu hub, connected to Manaus by a 660 kilometer long gas pipeline which crosses vast stretches of forest and rivers in a region dotted by conservation units and indigenous lands.

More recently, private companies such as Russian Rosfnet and Rio-based  Eneva bet on the expansion of fossil extraction in the Amazon, a very questionable strategy from a socio-environmental perspective. In September 2021, the Brazilian company inaugurated the Azulão Gas Treatment Unit in Silves, the first gas-producing area in the Amazon River Basin.

Announced by the company as a major advance in a statement to its shareholders, the project encouraged chief Jonas Mura, of the Mura people of Amazonas, to participate even more assertively in protests for the defense of indigenous territories in the region.

In November 2021, during COP26, the largest UN meeting on climate yet, Mura and 350.org activists held a protest in front of BTG Pactual’s headquarters, on Avenida Faria Lima, in São Paulo. The objective was to demand that the financial institution, which owns 21.53% of Eneva, dispose of these assets, which are harmful to local communities and the planet.

“They finance these companies that come to our territories and deforest everything, then pollute our rives. The fish are moving away, and the forest game too. This has been directly affecting our population of 1,500 people in the municipality of Silves,” said Mura during the demonstration.

BTG Pactual, which publicizes itself as a bank concerned with achieving high socio-environmental and governance standards (ESG), received a letter delivered by Mura on the day of the protest, but has since done nothing to disengage from the destruction of the Amazon.

It is important to remember that it’s not just a few multibillion-dollar companies conniving with this irresponsibility, but also the federal government itself. The National Petroleum, Natural Gas and Biofuels Agency (ANP) has included blocks located in the Amazon in some of its most recent auctions for areas to be exploited.

In December 2020, for example, 16 blocks in the Amazon Basin were offered to the private sector. At the time, the press reported a study by 350.org that pointed out that the production of oil and gas in these places can cause or aggravate considerable socio-environmental impacts, such as deforestation, invasions, and conflicts in 47 indigenous lands and 22 conservation units in the surrounding areas. The ANP ignored the study and kept the blocks available for auction. Dozens of other blocks in the biome are available through the permanent supply system right now.

This neglect of the authorities with the Amazon is also what leads the Huni Kuin to protest. Ninawá Huni Kui, the President of the Federation of Huni Kuin Peoples of Acre, has brought her warning about the need to stop the exploitation of fossil fuels to debates in Brazil and abroad, using the Amazon rainforest as the greatest example of this.

At COP26, in interviews with the international press or lectures organized by large universities, Ninawá says that in Pan-Amazonia, governments and companies use tactics to divide and conquer indigenous communities, such as promising unrealistic financial gains or attacking the indigenous way of life, as if they were an obstacle to progress.

What climate disaster supporters do not know or do not want to accept is that the vast majority of indigenous people living in the Amazonian Indigenous Lands are not willing to accept the impacts that oil and gas can cause, no matter how high the offer. For the original peoples, the forest is not a negotiable resource, but the source and very meaning of life. Therefore, native groups will continue to resist the insanity of a world based on fossil fuels and deforestation.

The deep sense of collectivity and integration with the environment are fundamental pillars of the existence of indigenous peoples. These values can be paths for Brazilian society to conserve, value, and promote the real development of the Amazon, with the forest standing, indigenous rights protected, and life preserved from the destructive impacts of fossil fuel production.