Solution package leads to sustainable production, fair trade, and protection of the Amazon

Quem é
an initiative that connects producers, businesses and consumers to protect and enhance the social, cultural and environmental wealth of the forest 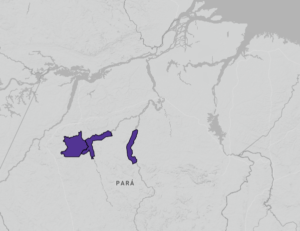 In the (RESEX) Riozinho do Anfrísio, Xingu, and Iriri extractive reserves, in the region known as Terra do Meio (the Middle Land), in Pará

The heavy rains of November and December brought down countless “ouriços”, as the shells surrounding Brazil nuts are known, plummeting from trees up to 50 meters high. In these months, people avoid accidents by not walking below these forest giants. In the (RESEX) Riozinho do Anfrísio, Xingu, and Iriri extractive reserves, in the region known as Terra do Meio (the Middle Land), in Pará, 400 families collect the fruits until April. Production reaches 200 tons annually.

From the forests sheltered in federally protected areas, oils and flours from babaçu and copaiba, natural rubber, and fish are also extracted. “Productive diversity guarantees an income for families all year round, but the Brazil nut is the flagship of traditional populations in the Amazon,” explained Naldo Lima, technical advisor to extractive reserves.

The nuts are separated by breaking sorted and dried shells. Then, they travel for up to 5 days by boat (about 400 km) before they are distributed to industries from the city of Altamira The production is stored for transport in the “cantinas”, commercial and political outposts by the riverside. Their name has been maintained since the rubber cycle, when the structures already supplied the region with items such as sugar, coffee, and oil.

Pará’s extractivist reserves are part of a team mobilized since 2016 by the Origens Brasil network, which currently gathers 2,300 producers from 66 community organizations and 61 indigenous ethnic groups. A ‘solutions package’ was built by the initiative, in which businesses are associated with the conservation of nature and Amazonian cultures in the great territories of Calha Norte and the Xingu, Negro, Solimões, and Tupi Guaporé rivers.

Extraction of natural rubber from a Rubber Tree in the region of Terra do Meio no Xingu
Credit: Rafael Salazar/Origens Brasil\

“Guaranteed and fair-priced purchases of production gave sustainable and safe conditions to support extractivist communities and reinforced their role in protecting territories against crimes such as mining, logging, and slave labor. The arrangement is not only commercial, but it also helps families maintain their customs and traditions,” Lima told PlenaMata.

Combining previous experiences, ancestral knowledge, and modern technologies, Origens reduced the pressure on communities affected by major works or crime. “The project initially benefited those affected by the Belo Monte plant or who were being harassed by loggers, miners, and ranchers. Without it, many could have been co-opted by forest-destroying economies,” said Patrícia Gomes, executive secretary of the Institute for Forestry and Agricultural Management and Certification (Imaflora), the initiative’s coordinator.

The supply of inputs such as nuts, Cumaru, latex, and pirarucu from 36 protected areas ensures items sold in Brazil and abroad are free from deforestation and other illicit activities. Production, transportation, and commerce are tracked and pay better prices to communities, which act directly in the initiative’s management. The innovative model was awarded by the United Nations (UN).

“The project gave us a glimpse below the treetops and showed that there are people there, living, working, and protecting the forest. Cumaru seeds, used in perfume manufacture, now yield much higher profits than wood for floors. Demand for natural rubber is currently higher than the supply,” said Patrícia Gomes, a master in Tropical Forest Management from the Federal University of Viçosa (MG).

The volumes of inputs contracted by almost 40 companies are adjusted to the productive capacity of each community or association. The final products reach several countries. Their sources can be checked through codes on the packaging.

Annual fees paid by companies associated with the project, such as Colorado and Wickbold, and funding from other sources, such as the Amazon Fund, keep Origens Brazil afloat.

At the end of 2020, Colorado launched a beer that changes its price as deforestation in the Amazon rises and falls. The product’s cost increased along with the destruction of the forest, which soared under the Jair Bolsonaro administration. The amount collected from the sales of this beer, made with babaçu nuts produced by communities in Pará, is donated to the Terra do Meio Cantina Network.

Wickbold also sells two types of bread in Brazil that are made with Amazonian inputs. Last year, the company bought 1 ton of babaçu flour and 33 tons of nuts from the extractive reserves of the Terra do Meio and other protected areas in the Xingu, Calha Norte, and Rio Negro regions.

“Over the last two years, we have paid over R$2 million to extractivist, indigenous, ribeirinho (riverside dwellers), and quilombola communities. The families benefited by these ingredient sales also protect millions of hectares of forest. They are the real environmental agents,” highlighted Pedro Wickbold, general director of the company.

There are still some obstacles to the expansion of trade brokered by Origens Brazil, such as communication difficulties, difficulties issuing invoices in remote regions, the outflow of inputs, and even cargo robberies on rivers and roads. More and better public policies and credit lines would help to structure and expand other sustainable trade arrangements.

“The contracts ensure values and volumes of purchase when there is too much nut in the market and the price drops. But the contracts may not cover higher prices when the harvests are reduced, making room for middlemen,” said Naldo Lima, a technical advisor in these protected areas.

Patrícia Gomes, from Imaflora, reinforces the need for a support network for projects of this type. “Keeping the forest standing is the best way to cut down climate pollutants. But we need to give a large scale to these production chains that make sustainable and fair use of the cultural and natural diversity of the forest. We are facing a turning point, with markets closing to items stained by deforestation and other impacts,” he added.