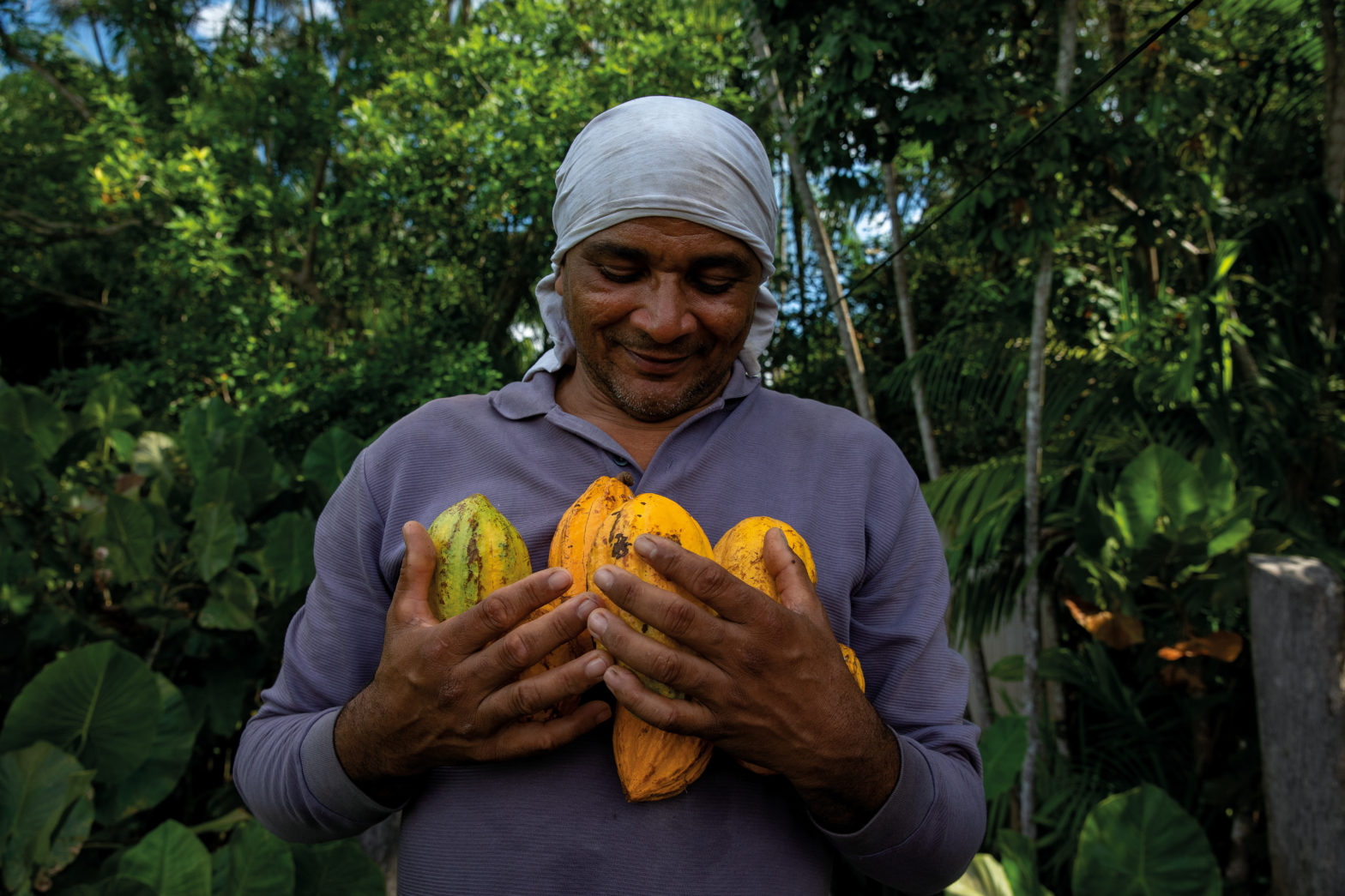 Products made with fruits and native knowledge help keep the forest standing and improve the lives of traditional and indigenous populations.

Name
De Mendes Chocolates, a company that sells chocolate and cupulate (chocolate made with the seeds of the cupuaçu fruit) produced with fruits native to the Amazon

What is it
it uses bioeconomy and fair trade to help conserve the forest, while maintaining and improving the lives of Amazonian populations 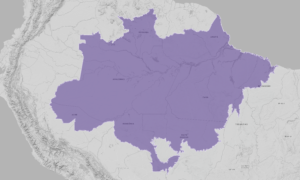 from the Amazon to the rest of Brazil and abroad

Born in the Amazonian city of Macapá (AP), César De Mendes has worked as a chemical engineer, researcher, professor, and consultant in several parts of Brazil. But this son of a quilombola mother and ribeirinho father carved new paths in his intense career when he recalled memories of family members making juice with cocoa straight from the tree. During his many travels through the forest, he moved to Colônia Chicano, a community with ribeirinhos and quilombolas in the municipality of Santa Bárbara do Pará, a 50 kilometers car ride from Belém.

There, he founded Chocolates De Mendes, the result of previous experiences with native fruits from the Amazon. The restless Mendes continued to find new ways to improve the production and processing of cocoa and cupuaçu, to apply new technologies, to expand the exchange of knowledge and to benefit populations deep in the Amazon, such as indigenous, quilombola, riverside, and caboclo communities and family farmers. These exchanges and permanent investigations led him to several expeditions through the forest, journeys which changed the way he thought of these supply chains.

Now, César’s goal is to have businesses that foster a respect towards nature and traditional Amazonian communities. With artisanal production, reaching the whole of Brazil and adding technologies such as carbon offsetting and blockchain tracking, De Mendes, founded in 2014, are opening new markets and winning prizes with their products, including Startup of the Year, granted during the World BioEconomy Forum, in October 2021, in Belém (PA), for its promotion of bioeconomy and mitigation of climate change.

In this interview with PlenaMata, the chocolates specialist, who sees himself as an “analog person”, tells us about his trajectory, mishaps in the forest, and the social and commercial achievements that have taken place since he rediscovered his roots and the power of Amazonian biodiversity. He also comments on the need for urgent action to preserve the forest and to balance the planetary climate, for the sake of humanity itself.

Below, we have the main excerpts of this conversation.

PlenaMata – Tell us a little about cocoa. Contrary to what many people still believe, it is actually a native fruit of the Amazon and has countless varieties, right?

De Mendes – Cocoa is native to the South American Amazon. It dispersed and generated an abundance of varieties in the Brazilian Amazon, which has more water and more forests. As commercial interests in cocoa grew, it began to be taken especially from the state of Pará to Europe, Africa, Asia, and other regions dominated by european colonizers. Other products in the region were also exploited, such as rubber trees, manatees, and wood. Cocoa is widely distributed in the Amazon, especially through floods and ebbs of water. There are even varieties adapted to flooded areas, with roots that support the tree above water. Formal genetic screening of cocoa began decades ago with work carried out by large industries and researchers. Today we know that there are about 2,000 native species and 35,000 cultivars adapted by people.

Describe what led to the foundation of De Mendes in 2014?

I have been working with chocolates since 2005 and my family enjoyed making cocoa and cupuaçu juices and other homemade items with the fruit I picked in my backyard. I closed my previous company, Amazônia Cacau, in 2013, to give a new meaning to the production of chocolates and “cupulates” from the Amazon. A large majority of customers in Brazil and abroad demanded that our products remind them of the Amazon and its peoples, and not only have beautiful packaging for the traditional bar format, created by Europeans about a century ago. Studies show that Andean peoples have been consuming liquid chocolate for almost 10,000 years. Recovering family and regional traditions, I went into the forest to look for native cocoa plants and the populations that maintain them. As the fruit occurs mainly in isolated places, partnerships with traditional and indigenous communities in each region was a natural arrangement for us to be able to produce the chocolate. We also took great pains to demistify and value chocolate made with native fruits, more intense and darker than varieties traditionally grown and consumed in markets such as Europe and the United States. The demand for and production of cocoa in the Amazon also improved after the witch’s broom disease started affecting cocoa trees in Bahia (in the late 1980s). Throughout this process, my greatest contribution was to produce chocolate with native cocoa and with forest populations in center stage.

Who supported this paradigm shift in the business?

I’d always worked alone. My previous were focused on me, but I have to admit that I was never a good manager, a good investor, and so on. I also felt powerless in the face of the many forms of aggression suffered by indigenous and traditional populations, whose rights as citizen are almost nil. From 2018 to now, they started to look for me on a much larger scale to evaluate possibilities of using cocoa and cupuaçu in their regions. I couldn’t handle all the community visits along with the work in the field and in the factory. I wanted to meet everyone’s demands, but lacked the resources, such as improved processes and technologies. I never sought direct support, but one of the interested parties was the company Celo de Bonfarto Kaj Konservado, which translates to something like “Purpose of Wellbeing and Conservation” in Esperanto. The company is our main investor.

What is the involvement of indigenous people, ribeirinhos, caboclos, and other populations in the production of chocolates and cupulates like?

“These populations are the true owners and guardians of these genetic materials and partners of the chocolate and cupuaçu projects. What good would it do to grow these fruits on a farm, to harvest and produce chocolate without the involvement of these people? Community visits occur through our mapping or invitation. We currently have 71 registered villages which already supply cocoa and cupuaçu throughout the Amazon, from Ashaninkas, in Acre, to Ianomâmis, in Roraima. We also maintain relations with 480 other communities, but we still don’t have the capacity to insert them into the business. At the suppliers, I carry out an average training of 20 days for the production of fine cocoa. A close, empathetic, and synergistic relationship makes all the difference. The exchange of knowledge with these communities is unparalleled, and everyone is paid above market values.

What are the criteria for defining suppliers considering their location in the forest?

Our basic production is 100% handmade. Native cocoa needs to be isolated in the Amazon and have little or no contact with non-forest populations and crops. In each region, I study the potential to protect cocoa and cupuaçu considering commercial demands and interests, the varieties available, if there are good environments for harvesting, opening, fermentation, drying, storage, and transportation, and even the possibilities of implementing agroforestry, with association of up to 70 different species. All of this, of course, in accordance with each community’s interests. After all, what better way to be moved than through eating. So, I also share about how they can produce homemade chocolate, improve their crops, and make cakes or other foods.

What were some of the more remarkable moments you experienced in your decades of travels?

I had two particularly chilling scares, both in the Javari Valley, in western Amazonas, where I was shipwrecked around five times. One of those times, the boat crashed into a huge boa during the night and sank. In another occasion, a jaguar stuck its face inside the tent I was sleeping in after a long day of walking through the forest. No one was hurt, but I needed several buckets of water to wash myself afterwards (laughs).

What is the production process like, from the forest to the factory to consumers?

The factory is in Santa Bárbara do Pará, which is connected by highway to Belém, from where the products can be shipped in national and international flights. Cocoa and cupuaçu come to us mainly by plane or boat, from the many ports in the capital of Pará. The sugar we use comes from a cooperative in Paraná. Today we sell 12 different chocolate and cupulate bars. The finished products are almost always shipped through Belém airport. We sell all over Brazil and occasionally abroad, such as in Vienna (Austria). But we’re talking to buyers in Latin American and European countries.

How have technologies been incorporated into artisanal production?

We are part of the Creative Laboratories of the Amazon (learn more at PlenaMata) and take advantage of technologies that can add quality, reliability, and reduction of impacts to our products. Each buyer can check the origin of the cocoa that was used in their chocolate by scanning the QR Code on each package (an example can be found here). Each bar’s greenhouse emissions are compensated, not only through the preservation of the forest, but mainly through the purchase of carbon credits generated by sustainable projects. It’s equally important to raise awareness about the forest populations, the true stars of its conservation. The way they live helps us to live in the cities, with quality air, water, and food.” Many people in urban environments do not even know about their existence or all the good they do.

What do you see in the future for businesses like yours in the face of advancing deforestation, the climate crisis, and other problems created by modern society?

Today, my food mostly comes from my own crops in a small area that I recovered. I continue to fight against the impacts suffered by the forest, rivers and Amazonian populations, but my vision is not very optimistic in the face of the lack of concrete actions of the world’s large economies. We have big meetings and speeches, but when I look around, I always see barges loaded with logs, an explosion of criminal mining. The best studies show serious impacts on the entire planet if the temperature continues to rise. Two-thirds of the world’s population will be severely affected by climatic extremes, amplifying hunger and other ills. Something has broken and needs to be urgently repaired, including with a change in our consumerism, in the lack of reflection on the fate of the planet and people. We are the only species that does not control its proliferation for the benefit of ecological balance, all the others do. It is not possible to continue increasing our population in the face of the increasing consumption of finite natural resources. There are good people raising alarm about the situation, but we need to roll up our sleeves and do something effective for the Amazon, for Brazil, and for the world. We already have enough theory.