A mess of seeds has been transforming the Xingu 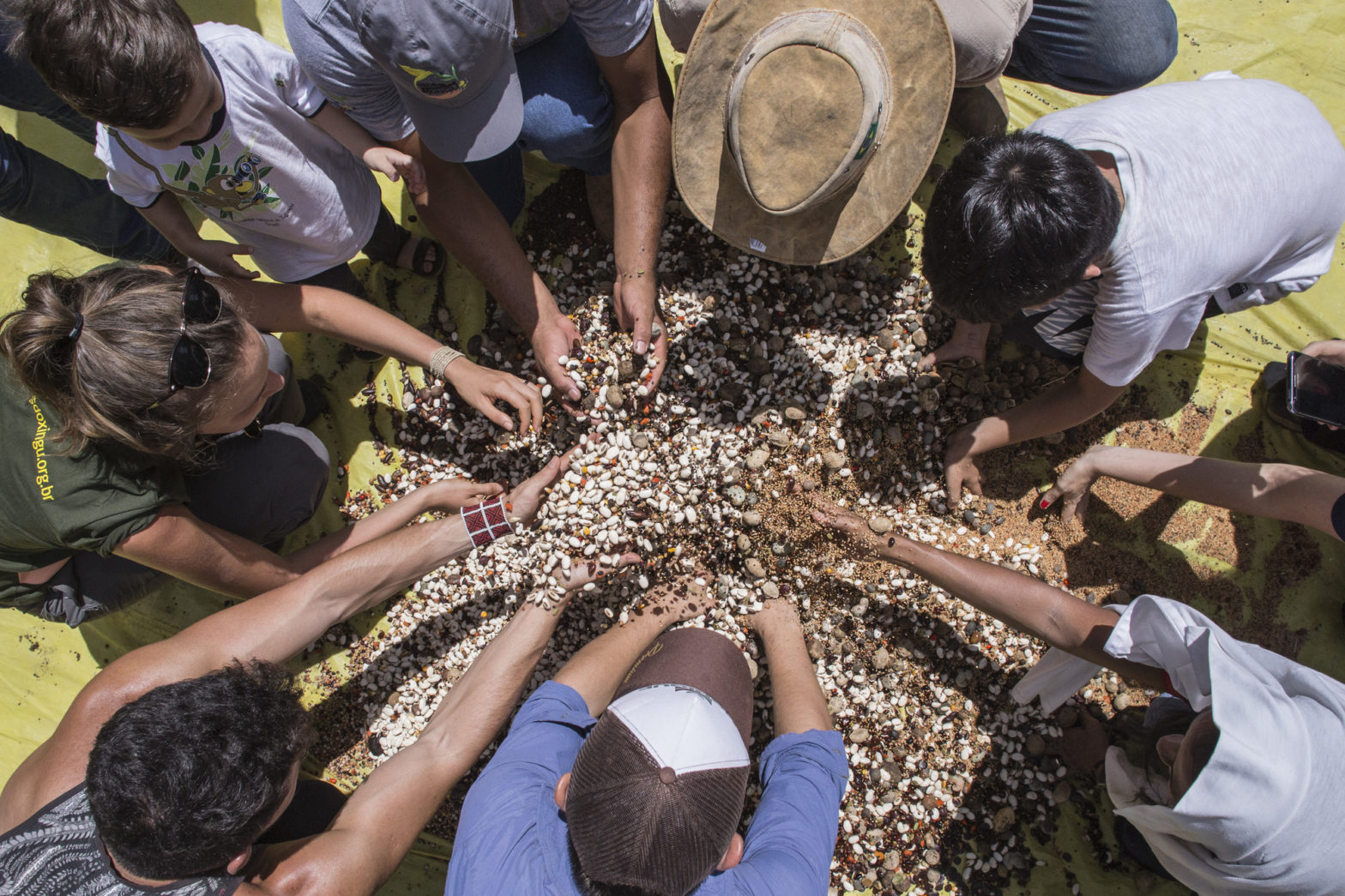 The Xingu Seed Network is one of the most successful movements to restore native vegetation in the Amazon and other biomes. Their method: to unite people to collect native seeds and sow them in degraded lands.

Name
An association of several groups of native seed collectors, aimed at the restoration of the Amazon and Cerrado forests

What is it
Indigenous populations, farmers, land reform settlers, rural producers, and environmentalists

Where is it
Surroundings of the Xingu Indigenous Land, in the north of the state of Mato Grosso

Almost 600 seed collectors that use native plants to recover deforested or degraded areas take part in the largest initiative of its kind in the country. Women are the majority among the indigenous people, family farmers, settlers and city dwellers mobilized by the Xingu Seed Network. The non-governmental organization has sown over 260 tons of seeds of 220 species native to the Amazon and the Cerrado.

About 1 million trees have been planted with seeds collected by the indigenous Ikpeng community, one of the ethnic groups linked to the Seed Network in the Xingu Indigenous Park, in Mato Grosso. This estimate is based on the 600 tons of seeds sold annually by the 89 women and four men of the Yarang Women’s Movement – yarang means leaf-cutting ants, who walk together in the woods collecting leaves and seeds, which they take home.

“The Ikpeng descend from the trees. Each time one is planted, it’s as if the people gained more life. Women collect the seeds to recover the riverbanks, so that in the future everyone has plots to plant in and fish. They want to see their seeds turn into forests”, explained Oreme Ikpeng from Canarana (MT), where he arrived after 16 hours by boat and car from the protected federal area. Many springs and riverbanks are degraded by agribusiness outside the Xingu Indigenous Park. The Xingu Basin presented the worst deforestation rates for the first half of the last three years according to the Sirad-X, bulletin, from the Xingu Network. The destruction reached an area equivalent to twice the municipality of Recife (PE) or more than 92.1 thousand hectares of forest.

Oreme, an agroecology technician who helps connect the different peoples in the Network, says that seed collection mobilizes the villages substantially. “Everyone participates: Grandparents, mothers, fathers, and children, totaling over 300 people”, he said. Plants that had to be sought out in long journeys through the forest on foot or by boat can now readily be planted in the communities. “Some women are planting near the villages to facilitate the collection of rarer species”, he added.

The Seed Network was born from the Y Ikatu Xingu campaign, aimed at the recovery of protective riparian forests in the northeast of Mato Grosso and, over the years, has been recognized as one of the most successful movements to restore native vegetation in the country. It unites the knowledge of indigenous people, farmers, and scientists to make forest planting cheaper and more effective, creating a model that can help the country protect its biodiversity and the climate. In 2022, it will be 15 years old.

Seeds collected by the indigenous groups and local communities are used in protected territories or sold for green recovery of public and private areas. The collectors have received over R$4.4 million through the Network. When the seeds are ready to plant, different species are mixed into a “muvuca”, a term of African-Indigenous origin for a festive, disordely gathering of people, or a hodgepodge. One hectare of forest can be recovered with 80 kg of seeds. These mixtures will have plants of different types, including fruiting, medicinal and timber trees.

Seed orders occur until June, when orders are passed on to collector groups, according to their production capacity. The orders are made especially by civil society organizations and farmers who want to restore their forests. Less than 1% of the 25 tons of seeds that will be collected this year is assigned to smaller clients, such as tree nurseries and bio-jewelry production.

“The initiative takes advantage of the ancestral habit of sowing to recover lands and springs. Increased income is important for many families, but the greatest result was to bring together groups with such different backgrounds and cultures. There is no muvuca of seeds without a muvuca of people, and this meeting expands the success forest recovery initiatives,” said Rodrigo Junqueira, one of the pioneers in regional forest restoration and part of the Xingu Seed Network board.

“The initiative takes advantage of the ancestral habit of sowing to recover lands and springs. Increased income is important for many families, but the greatest result was to bring together groups with such different backgrounds and cultures. There is no muvuca of seeds without a muvuca of people, and this meeting expands the success forest recovery initiatives.”

– Rodrigo Junqueira, advisor at the Xingu Seed Network board

The Seed Network’s achievements, including the direct recovery of almost 7,000 hectares of forests, are so positive that they inspire actions in the Cerrado, Pampa, Caatinga, Atlantic Forest, and, of course, in the Amazon. People and muvucas are restoring the vegetation of federal and state protected areas such as the Xavante indigenous lands, the Triunfo do Xingu Environmental Protection Area (APA), the extractive reserves of the Xingu and Iriri rivers, in different regions of Pará, and in the Apuí region of southern Amazonas.

“This shows us that the technique is feasible in several other biomes in the country. The diffusion of the Seed Network’s model also breaks resistance to the recovery of native vegetation, overcoming some political boundaries. Traditional farmers have opened their doors to the muvucas,”said Junqueira, a master in Environmental Science at the University of São Paulo (USP).

In Mato Grosso, the model has been used since 2013 on seven farms growing corn, cotton, beans, soybeans, and raising cattle, all property of the Fazenda Brasil Agricultural Group. Over 800 hectares have already been recovered, with better results and lower costs than other techniques. Using seedlings, the owners spent R$12 thousand in three years to recover each hectare – muvucas reduced the cost to about R$7 thousand.

“The restoration was slow and more expensive with the seedlings. At first, we didn’t have much faith, but the plants required almost no maintenance, and the restoration is much richer and more effective with the muvucas. We are impressed by the high survival rate of plants that are born from planted native seeds”, highlighted biologist Artemizia Moita, environmental manager of the company, founded in 2006.

Muvucas can also help the country to comply with agreements for the restoration of forests, benefiting the climate, wildlife, and agriculture, with more rain and other environmental services. According to the 2012 forestry legislation, 12 million hectaresmust be recovered with forests in Brazil. Other commitments to protect and restore forests came from the United Nations Conference on Climate Change (COP26), which took place in November in Glasgow, Scotland.

“The techniques used by the Seed Network and other entities throughout the country increase the country’s chances of fulfilling their forest restoration goals, since they use the seed collectors’ knowledge, not replicating industrial native vegetation enterprises that have not been sustainable over time,” said Rodrigo Junqueira, from the Instituto Socio-Ambiental (ISA).

In partnership with the NGO, the Xingu Seed Network released  the film “Fazedores de Floresta” (“Forest Makers”) this week, with stories and curiosities about the initiative that protects and recovers forests in the Xingu Basin and other regions of the country. Personalities such as Maria Gadú, singer and socio-environmental activist, and Tadeu Jungle, from film production company Junglebee, as well as members of the Network, take part in the film. The production can be experienced in VR at https://fazedoresdefloresta.org/

In the top picture, ISA staff from Canarana (MT) and the Xingu Seed Network prepare a seed muvuca. Credit: Tui Anandi/ISA.
All images were provided by ISA and Juan Schenone (@projeto_origem) for exclusive use in this story.