The state with the largest production of soy and cattle in Brazil has organized a strategy called Produce, Conserve, Include (PCI) to point the economy towards zero deforestation and emissions.

Who’s involved
Members come from the government, NGOs, and the private sector. 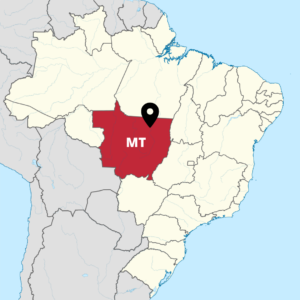 This initiative, launched at the 2015 World Climate Conference in Paris (France), brought together governments, non-governmental organizations, and the productive sector to contain the social and environmental impacts of the state of Mato Grosso’s economy. Different entities understood that it was possible to make agricultural and forestry production in the state more efficient while reducing deforestation and greenhouse gas emissions and conserving and recovering native vegetation. To do that, however, investments were required.

Thus the Produce, Preserve and Include (PCI) initiative was born. Its main goal is to reduce Mato Grosso’s carbon footprint – the state is one of the historic leaders in deforestation in the Amazon. In Brazil, changes in land use, such as forest destruction, are the main source of CO2 emissions, which is one of the leading causes of the climate crisis. Mato Grosso is responsible for 10.6% of national emissions, the second-highest behind Pará.

Since its creation, the PCI has been updated. In 2019, the PCI Institute was created in a partnership between private, governmental, and civil entities, to ensure the resilience of the strategy with changes in government administrations. The idea is for PCI to become a state policy.

The PCI unfolds in a series of actions. One of the most successful so far has been to enable investments in state enforcement against environmental crimes. “The investments even allow for the remote embargo of areas where crimes occur. This made a difference in controlling deforestation and fires. Without the PCI, these resources probably wouldn’t have been applied in this effort. This occurred at a time when federal environmental inspections were on a steep downward trend”, highlighted Alice Thuault, deputy director of the Centro de Vida Institute (ICV) of Mato Grosso. According to an ICV report, in 2020 there were reductions of 76% in embargoes and 62% in violation notices registered by federal agencies in 2019. These were the lowest rates in 10 years. Meanwhile, the state had more than 2,000 violation notices issued between January and October 2020, 33% higher than registered in the entire previous year.

Other goals of the PCI include producing more grains, meat, and wood in already degraded or deforested areas, maintaining six out of every ten hectares of native vegetation, implementing the forestry legislation to its full extent, increasing the participation of family farming in the domestic market and eliminating illegal deforestation.

The executive director of the PCI Institute, Fernando Sampaio, considers that the production goals have advanced thanks to the sector itself. “Livestock and soy have increased productivity in non-forest areas,” he said. “A task force appointed by the government also made the validation of Rural Environmental Registrations (CAR) go from 500 to 5 thousand monthly applicants”, highlighted the agronomist. CAR is a mandatory electronic record for rural landowners and squatters defined by federal forest legislation published in 2012. CAR validation consists of verifying that a given area does not overlap with protected areas and other properties and that they comply with environmental legislation.

Another one of PCI’s initiatives was the commitment made by Mato Grosso to reach net-zero carbon emissions by 2050, together with other Amazonian governments and other regions of the country. Net emissions are zeroed when there is a balance between the emission and removal of greenhouse gases from the atmosphere. This also depends on the expansion of sustainable forest management and the containment of forest fires, as well as land regularization, and the recovery of native vegetation.

It’s a big challenge for the largest Brazilian producer of soy, corn, cotton, and cattle, which is also home to 43 indigenous ethnic groups, large watercourses, and which can grow in ecotourism, family production, and nature conservation. “The PCI inspires other processes and investments and prepares the state to reduce deforestation and emissions. It is a positive strategy for the mobilization of governments and other actors, even though it still lacks more practical results”, highlighted Alice Thuault, from the ICV.

But there is still a long way to go. Civil, private, and public entities that monitor the strategy concluded that more technical information is needed to monitor the goals, reinforce the CAR and forest restoration, and “a long way to go for the satisfactory socio-productive inclusion of small and medium producers”.

In Sampaio’s point of view, the progress of the initiative is also linked to a better understanding of the economic, social, and environmental dynamics in the state, as well as the consolidation of teams in different regions that will be able to speed up the achievement of its goals. “Committees will be formed initially in the municipalities of Juruena, Cotriguaçu, Sorriso, Barra do Garças and Tangará da Serra. Monitoring will be qualified and updated with partnerships with MapBiomas and Lapig. Measures like this should improve the understanding of where each goal will be better achieved in the state and with what resources or investments, whether public, private or from international cooperation”, he explained.

Estimates by the Mato Grosso government and NGOs estimate that up to R$43 billion will be needed to make the program a reality by 2030. Mato Grosso and other Amazonian governments are seeking resources for conservation and less destructive production in the Amazon from different sources, including the Biden government. In August, a US government representative discussed conservation projects with the nine governors of the Legal Amazon.

“The PCI shows that there is a lot to be done and that these investments pay off for the states. No government will do it all alone. Hence the importance of actions by the private sector, which has taken on its own sustainability agendas. There is pressure from the financial sector for socio-environmental adjustments in the production chains”, commented Sampaio.

To reach greater exposure in search of international resources, updated program goals will be presented at the 26th United Nations Climate Conference, from October 31st to November 12th in Glasgow, Scotland. “The changes are still being negotiated, but we don’t want them to be reduced, for there to be a setback. Quite the contrary, it is necessary to establish goals for the protection and inclusion of indigenous peoples, defining priority objectives over time and for the different regions of the state. We need the goals to work and press for the decarbonization of Mato Grosso’s economy”, highlighted Alice Thuault, from ICV.