Reaping the Benefits of Amazon Protection 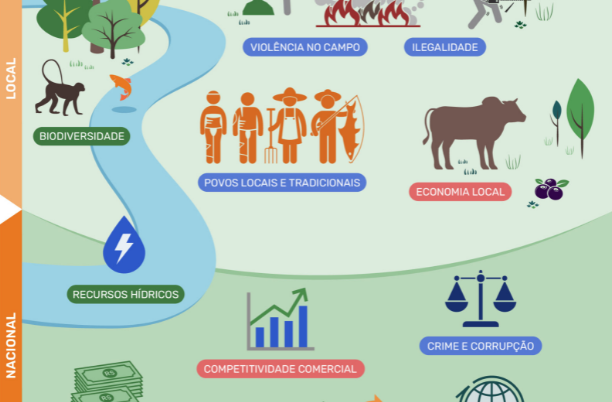 Conserving the Amazon brings countless and varied benefits not only for those who live in the region, but for all of Brazilians and the world.

Protecting the more than 3 million hectares of remaining Brazilian Amazon Forest is by no means an easy task, but it is possible, and it is worth it. Some of its benefits — such as conserving the Amazon’s rich biodiversity, maintaining the balance of forest ecosystems, ensuring the livelihoods of native peoples and locals — are direct effects of forest protection and are therefore largely familiar to a broad audience. So, let’s focus on the less familiar benefits.

Conservation can foster socioeconomic development in the Amazon. There are two key aspects to this. First, the destruction of the forest is fueled by predominantly illicit and predatory activities, so fighting Amazon deforestation is equivalent to fighting illegality and corruption. Forest clearings are, in their vast majority, illegal, and deforestation is associated with high rates of rural violence, as well as with criminal networks involved in illegal mining and trafficking of wildlife, weapons, and drugs.

The Amazon’s long-standing struggle with insecure property rights also aggravates conflicts over land and favors the action of illegal land grabbers, who cut down the forest as a means of claiming ownership over public lands. An environment of widespread and deeply rooted illegality restricts the region’s access to formal markets and limits its capacity to attract investments and good institutions. This implies enormous production and welfare costs.

Second, deforestation is driven by unproductive activities, so it cannot be justified as a necessary condition for local economic development. Although pastures occupy a large share of deforested areas in the Amazon, land-grabbing, not production, appears to drive the expansion of pasture areas. Evidence shows that increasing the value of agricultural production in the region does not require cutting a single additional tree, since there is ample scope for increasing productivity using areas that have already been cleared.

Yet, the Amazon’s potential for economic growth is not restricted to the agricultural sector. There is mounting expectation regarding the possibility of using the region’s invaluable biodiversity to boost Brazil’s participation in global markets. Forest conservation is thus an opportunity to advance a model for regional sustainable development.

Beyond local benefits, the Amazon also contributes to socioeconomic development at a national scale. Protecting its native vegetation is necessary for preserving biophysical factors that are essential for human wellbeing and production across Brazil, particularly for the agricultural and energy sectors. The Amazon Forest plays a fundamental role in regulating water cycles, as it stabilizes rainfall patterns and protects against extreme weather events. Failing to protect the Amazon will come at a high cost.

Amazon conservation is, moreover, a vital instrument for promoting Brazil’s position in global markets that increasingly value supply chain compliance with environmental norms and commitments. These are not niche markets, but broad and consolidated ones that are seeing a shift in investors, businesses and consumers’ preferences. The country’s capacity to protect its natural resources gives Brazilian products a competitive advantage in these markets.Additionally, combatting tropical forest loss can help Brazil play a prominent role in the global effort to mitigate greenhouse gas emissions and fight climate change. The Amazon Forest is an enormous carbon sink, and nearly 60% of it is within Brazilian territory. What happens in the forest reflects on national emissions trajectories. Amazon deforestation accounts for nearly two fifths of the country’s total emissions since the year 2000. The period during which Brazil achieved the largest sustained reduction in emissions coincides with that of a sharp decline in forest clearing, and the recent increase in deforestation is already reflected in the country’s rising emissions.

Accelerating climate change is not, however, the only global threat that is associated with the loss of tropical forests. Human interference in natural habitats affects the risk of emergence of new zoonoses, infectious diseases that are transmitted from animals to human beings. These diseases may bring devastating costs, as evidenced by the current COVID-19 pandemic. In this scenario, forest conservation serves as a cost-effective way of mitigating the risk of emergence and worsening of diseases at a global scale.

Given the local, national, and global gains that come from protecting the Amazon, it simply makes no sense — from environmental, social, economic, political, and public health perspectives — for Brazil to passively watch as the forest is destroyed. Currently, protections and safeguards are being eroded and dismantled. It is imperative that the country recognize both the immediate and broader benefits that come from protecting the Amazon Forest. Brazil knows what must be done to address this challenge and is perfectly capable of doing it.